A quiz on "Fantastic Mr Fox" by the great Roald Dahl!

Quiz Answer Key and Fun Facts
1. What are the names of the three farmers who are after Mr Fox?

These horrible farmers want to get Mr Fox, but he is too Fantastic for them to catch!
2. How many chickens with dumplings did the chicken farmer eat for his breakfast, lunch and supper?

Maybe this is why he is enormously fat!
3. What ailments did the duck-and-goose farmer have because of his diet of doughnuts and goose-livers?


Answer: A tummy ache and a beastly temper

More specifically, his diet was mashed goose-livers which he mashed into a paste and stuffed into doughnuts. I think this would give anyone a tummy ache!
4. What did the turkey-and-apple farmer look like?


Answer: Thin as a pencil

This was Farmer Bean, who was apparently the cleverest of all three farmers!
5. Complete the last line of the children's song: These horrible crooks, So different in looks, Were none the less equally ....

Even the children disliked the nasty farmers!
6. The Farmers shot Mr Fox's tail off while he was in the chicken house.

They shot at him just as he was coming out of his fox hole.
7. What do the Farmers say they will have Mr Fox out in no time with?

The Farmers are very desperate to get Mr Fox, so desperate that they rush to get tractors.
8. Which Farmer stays behind to make sure Mr Fox doesn't escape while the others fetch some machinery?

Boggis draws the short straw and has to watch the hole!
9. Which Chicken House do the foxes tunnel in to?

Mr Fox and all his friends eat very well thanks to Mr Boggis's Chicken House Number One!
10. Which families of animals were present at The Great Feast?

Many hungry animal families joined together to enjoy the feast gathered for them by Mr Fox and prepared by Mrs Fox.
Source: Author marajade84 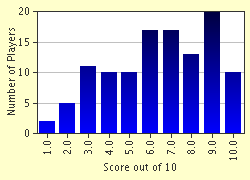 
Other Destinations
Explore Other Quizzes by marajade84