A quiz on the book 'James and the Giant Peach' by Roald Dahl. Have fun!

The rhino had escaped from London Zoo and ate them on a crowded street in full daylight.
2. What did the old man give to James?

The bag contained some green things which James was supposed to add to water along with ten hairs from his head.
3. How much did Aunt Sponge and Aunt Spiker charge the public to see the giant peach?

Children under six weeks old got in half price and it was two shillings if somebody wanted to take a camera in.
4. How many feet did Centipede actually have?

Centipede said he had 100 but Earthworm said he only had 42. Ladybird later agreed with Earthworm.
5. Where did the giant peach land after it rolled out of the garden?


Answer: In the sea

6. Which of these was used as bait so they could escape the sharks?

Every time a bird came down to get Earthworm James tied some silk around the bird. Eventually there were enough birds to lift the peach out of the sea and away from the sharks.
7. Which of the insects fell off the peach while it was up in the air?

James tied some of Silkworm's silk around his waist and went down after him to save him.
8. What did James and the insects see in the clouds?

They were making snow, rain and rainbows.
9. Where did the peach land when it fell out of the sky?


Answer: On the Empire State Building

A plane came past and cut the silk that was attached to the birds and the peach fell back down to earth.
10. Who lived inside the peach after it was placed in Central Park?

James lived there and wrote a book about his adventure.
Source: Author blakka 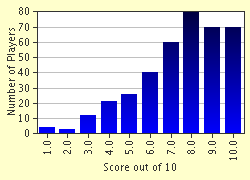 
Other Destinations
Explore Other Quizzes by blakka