Let's see what you know about Harry Potter and the Goblet of Fire, by J.K. Rowling(one of my favorite authors!). Lots of small details, so I hope you paid attention!

Quiz Answer Key and Fun Facts
1. What is the magical core used in Fleur Delacour's wand?

The hair in question is actually from Fleur's grandmother. It's not something Ollivander would normally use in his wands, and he declares it "makes for rather temperamental wands", but reassures Fleur that if it works for her, it'll be fine.
2. What do the horses, that pull the Beauxbatons carriage, drink?

When the headmistress of Beauxbatons asks Dumbledore to take care of the horses, he assigns Hagrid to the task. Madame Maxime, since Hagrid was not present at the time, seemed to doubt that any teacher could handle her rather large horses.
3. What does Harry tell the Weasley twins he'll do with his Triwizard Cup winnings if they don't take it?


Answer: Throw it down the drain

Harry insists that the twins take the money for their joke shop. He says they could all do with a few laughs. "I've got a feeling we're going to need more than usual before long." Boy, is he right (Dolores Umbridge becomes a teacher in their fifth year.)
4. What is the answer to the riddle given to Harry by the sphinx in the maze task?

The riddle given to Harry is as follows: "First think of the person who lives in disguise, Who deals in secrets and tells naught but lies. Next, tell me what's always the last to mend, The middle of middle and the end of the end? And finally give me the sound often heard During the search for a hard-to-find word. Now string them together, and answer me this, Which creature would you be unwilling to kiss?" "Spy-d-er". Harry figures out 'er' during his search for the sound often heard... blah blah blah.
5. What is the Weasley's bet for the World Cup Match?


Answer: Ireland wins, but Krum gets the Snitch

Fred and George bet their entire savings: thirty-seven Galleons, fifteen Sickles, and three Knuts, along with a fake wand, which fascinated Ludo Bagman, but was declared rubbish by Percy. Mr. Bagman never did pay them back, even though they won the bet.
6. What country is Viktor Krum from?

Viktor Krum was the Bulgarian seeker from the World Cup. He attends Durmstrang school and comes to Hogwarts with the other students from Durmstrang for the Triwizard tournament.
7. What two magical creatures are blast-ended skrewts a combination of?

This is mentioned in an article written by Rita Skeeter, telling the world about Hagrid's heritage as a half-giant. Malfoy and his Slytherin gang seemed to enjoy reading the horrible Rita Skeeter articles!
8. How long do the Triwizard champions have in the lake task?

Though three out of the four contestants retrieved their hostages (Fleur was attacked by Grindylows and had to return to the surface), no one returned inside the time limit. Even Cedric Diggory, the first to return, came back one minute outside the time limit.
9. What does SPEW stand for?


Answer: Society for the Promotion of Elfish Welfare

Originally, Hermione's organization was going to be called Stop the Outrageous Abuse of Our Fellow Magical Creatures and Campaign for a Change in Their Legal Status, but it wouldn't fit on her badges.
10. What magical plant did Harry use to survive the second task?

After staying up all night trying to find a way to breathe underwater, Harry is woken up by Dobby, with a glob of gillyweed in his hand, ten minutes before the second task.
Source: Author funkybubbel8 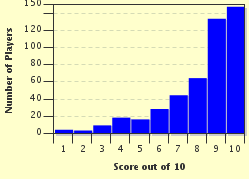 
Other Destinations
Explore Other Quizzes by funkybubbel8