This quiz introduces the mysterious realm of psychology. Psyche yourself up and come play: this quiz is perhaps more suitable for an older child, but anyone can try. :)

Quiz Answer Key and Fun Facts
1. Psychology is the study of the mind and mental processes.

Psychology investigates the mind and why we think and act in the way we do. Not an easy job! Some might argue that to know psychology is to know what makes humans tick, although animal psychology is also studied, and we frequently compare human behaviour with other animals' behaviour.

And, well, chocolate might not have helped you answer this question, but it tastes nice anyway.
2. Guten Tag! In which country, known for its capital of Berlin, was the first psychology lab built in 1879?

He tried to make psychology a science of its own (and succeeded, apparently!).

His approach was all about introspection: his students would describe their feelings, thoughts and reactions when different objects were shown to them.

This method was generally discontinued (perhaps unsurprisingly) but was the foundation to modern psychology, since Wundt got psychology the foot in the door it needed for scientific study.
3. Which area of psychology focuses on how others influence our thoughts and behaviour?

What makes us befriend each other? Why do some of us act differently in a group compared with how we might if we were alone? What shapes our attitudes to a certain object, person or situation? Social psychology attempts to explain all of these and more.
4. Which of these is NOT a famous psychologist? (Hint: Think Disney...)

When dogs see food, they salivate (or drool). Ivan Pavlov found that ringing a bell when the dogs saw food got them to salivate over the bell sound - which he called an example of classical conditioning, or learning through association.

Carl Rogers was involved in Rogerian therapy, a talking therapy which tried to help people achieve their true potential by giving them power to deal with their problems.

Carl Jung liked looking at the unconscious and analysing dreams to find their 'true meaning'. If, indeed, dreams had any true meaning.
5. Cognitive psychology likens our mental processes to which of these machines? (Hint: You are probably playing the quiz on one right now.)

Cognitive psychology focuses on how we think, remember and learn. Cognition is about knowledge - how we come to know what we do, and therefore how we act in the way we do.

Like a computer, cognitive psychology argues that we have data inputs which we then store and retrieve for usage. A criticism of cognitive psychology is that it struggles to explain emotional influences on our behaviour.
6. Which common mental health condition is characterised by a persistent low mood, a lack of appetite and loss of energy?

Depression is a mental disorder that affects one in five people in their lifetime, and affects millions of people every year. Major depression often involves a general lack of interest and lifelessness feeling. Some compare it to being in a black hole. Despite this, a doctor can help: one should not suffer in silence.
7. Which ancient Greek believed the heart was the home of thoughts and emotions, and that the brain's purpose was to cool blood?

Aristotle, born ages ago in 384 BC, believed that the mind was what made a human, well, a human. He claimed it was a part of the soul that helped us to obtain knowledge: and that the heart itself was the key to life. Perhaps this has been why the phrase 'thinking with my heart' has endured for so many years.

We know the brain is the 'home of thoughts and emotions' now, and that the brain doesn't cool blood, but Aristotle's theories were highly interesting at the time (and still are!).
8. Psychologist BF Skinner placed a rat in a box with a lever. When the lever was pressed, the rat would get food, so it would press the lever more often. What did Skinner claim this was an example of?

Positive reinforcement is the increase of a behaviour through giving the person/animal something (e.g. food).

Negative reinforcement is the increase of a behaviour through taking something away. For example, if the rat needed to push the lever to avoid an electric shock, it would learn to do so, according to Skinner (and yes, he did this kind of experiment too. Poor rats).
9. Psychologist Mary Ainsworth thought a securely attached infant had sensitive and responsive care from their mother.

Ainsworth believed 70% of infants had a secure relationship with their mother (she did not focus on the father much) which was a good thing.

A mother who was attentive to a child's needs, warm and caring would be likely to make a secure attachment. The other 30% were said to be insecure, suggesting the mother did not meet their needs as well, and this might have lead to self-esteem issues later in life.
10. Which famous Austrian psychologist, who used the psychoanalytic method, believed that most of our problems came from our childhood?

Sigmund Freud was a very controversial psychologist. He believed we had 'defence mechanisms' that would reduce mental difficulties. The worst of these was said to be repression: where we would block a memory from coming to the conscious, causing negative energy to remain in us.

For example, a very frightening event in childhood might be repressed.

His therapy was to try and get his patients to talk about their past, unblocking these memories. He would then claim they were cured, although, in reality, this was rarely the case...
Source: Author malik24 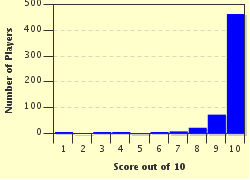 
Other Destinations
Explore Other Quizzes by malik24