Science is all around you. This is a quiz about all sorts of science, most suitable for ages 8-12, but anyone can have a try!

Quiz Answer Key and Fun Facts
1. What is the chemical formula for water?

H2O is the formula for water. This means that it contains 2 hydrogen (H) atoms joined to one oxygen (O) atom. When atoms are joined together they make a molecule.
2. What does a caterpillar change into?

A caterpillar is one of the stages in the life cycle of a butterfly. The caterpillar eats lots of food then makes a case for itself called a chrysalis and comes out as a beautiful butterfly.
3. What are clouds made of?

Clouds are made of water. When a cloud gets too full of water, it rains. If it's really cold, the rainwater freezes and this is when we get snow.
4. How many colours are there in a rainbow?

There are seven colours in a rainbow: red, orange, yellow, green, blue, indigo and violet. It's easy to remember the right order by taking the first letter of each colour and using them to spell ROY G. BIV.
5. If an animal is a carnivore, what does it do?

Carnivores are animals that eat meat. A tiger is an example of a carnivore.
6. What does a tadpole turn into?

A tadpole is one of the stages in the life cycle of a frog. Frogs belong to a class of animals called amphibians. This means that they can live in the water or on land.
7. What is the name of the force that holds everything to the earth?

Gravity is what holds us to the earth so we don't all float off into space! The moon has a lower gravity than earth. If you were to stand on the moon, you'd be able to jump up much more easily since there would be less force holding you to the ground.
8. If an animal is a herbivore, what does it do?

Herbivores are animals that only eat plants. A cow is an example of a herbivore.
9. Which of the following travels the fastest?

Light travels at almost 300 million metres (about 950 million feet) every second! Sound is the next fastest, travelling almost 350 metres (around 1130 feet) every second. Whew! There are some planes that travel faster than the speed of sound, but nothing goes faster than light!
10. What do you call a scientist who studies the stars? 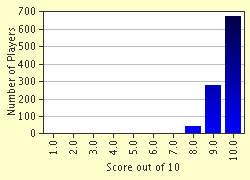