This quiz is based on the 6th Harry Potter book. Please do not try it if you haven't read the book, as it may contain spoilers.

Share on Facebook
Share on Twitter
Share by E-Mail
Author
Ambroxia
Time
3 mins
Type
Multiple Choice
Quiz #
214,006
Updated
Dec 03 21
# Qns
10
Difficulty
Average
Avg Score
7 / 10
Plays
7000
This quiz has 2 formats: you can play it as a or as shown below.
Scroll down to the bottom for the answer key.

Quiz Answer Key and Fun Facts
1. Herbert Chorley, the Prime Minister's Junior Minister, has been entertaining the public by impersonating which animal?

Herbert Chorley was 'reacting to a poorly performed Imperius Curse'.
2. What is Professor Sprout's first name?

In the chapter 'After the Burial', Prof. Slughorn calls her by her first name.
3. What is Dumbledore's idea of 'a few words'?

"Nitwit, oddment, blubber and tweak" are what Dumbledore said in his speech in the first book to the students of Hogwarts. He says this "to start off", and Harry asks Percy if Dumbledore is "a bit mad". Percy says that he is! Harry remembers this during Dumbledore's funeral and feels like laughing.
4. Who is Marcus Belby's famous uncle?

Marcus's uncle is Damocles, who invented the Wolfsbane Potion. Marcus Belby was in the Slug Club on the train to Hogwarts. Slughorn was very sweet to him until he found out that Marcus's father and uncle didn't get along well.
5. What is Snape's mother's name?

Eileen Prince was Snape's mother. She married a Muggle, Tobias Snape, and Severus Snape became the Half-Blood 'Prince'.
6. In Slughorn's first class, which potion was nearest to the Slytherins?

Veritaserum was nearest to the Slytherins. The Polyjuice Potion was near the Ravenclaws, and Felix Felicis was on Slughorn's desk. Harry, Ron, Hermione and Ernie Macmillan sat at the table nearest to the love potion, Amortentia.
7. What is Arthur Weasley's dearest ambition?


Answer: To find out how airplanes stay up

In the chapter 'An Excess of Phlegm', Molly Weasley asks Arthur his secret question - What is your dearest ambition? We also find out that Mr Weasley calls his wife 'Mollywobbles' when they're alone together.
8. Who thinks Fleur is worse than Umbridge?

Ginny gets irritated when Fleur keeps treating her like a child.
9. Which was the only subject in which Hermione did not get an Outstanding OWL?

Hermione got an E for Defense Against the Dark Arts, and an O in all her other subjects. She was actually disappointed!
10. In which subject does McGonagall say Neville's grandmother failed for her OWLS?

Neville's grandmother doesn't want Neville to take Charms because she thinks it's a 'soft option', but it's really because she failed her Charms OWL.
Source: Author Ambroxia

This quiz was reviewed by FunTrivia editor minch before going online.
Any errors found in FunTrivia content are routinely corrected through our feedback system.
Most Recent Scores
Jan 04 2023 : klem2go2: 8/10
Dec 14 2022 : Guest 80: 4/10 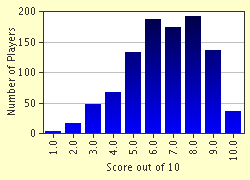 
Other Destinations
Explore Other Quizzes by Ambroxia