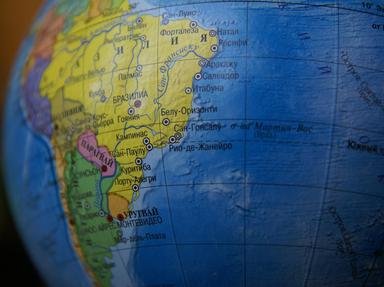 A continent of ancient civilizations and diverse geographical regions, South America has most of its landmass located south of the Equator. Can you correctly label the 12 South American nations on the map? Enjoy!


The Republic of Ecuador is aptly named because the Equator passes through the nation. The country's Spanish name is República del Ecuador; and the word "Ecuador" means Equator. The capital of Ecuador, Quito, is located a mere 40 kilometers (25 miles) south of the Equator.
2. Colombia


The Bolivarian Republic of Venezuela derived its name from the word "Veneziola", which means "Little Venice". The country's famous landmarks include Angel Falls, which is the world's tallest uninterrupted waterfall.
4. Guyana


The Co‑operative Republic of Guyana borders the Atlantic Ocean to the north. Guyana is one of the world's least densely populated nations. Guyana is the only South American nation that adopts English as its official language.
5. Suriname


The Republic of Suriname is the smallest South American nation. The country borders Guyana to the west and French Guiana (an overseas department of France) to the east. Most of the country is covered by the vast tropical rainforest.
6. Peru


The Republic of Peru borders the Pacific Ocean to the west. The country is noted for its UNESCO World Heritage Site, Machu Picchu, which is an Inca citadel that is located approximately 80 kilometers (50 miles) from the Peruvian city of Cusco.
7. Brazil


The Plurinational State of Bolivia is one of the two landlocked South American nations, the other being its neighbouring country, Paraguay. Bolivia is named after Venezuelan political leader Simón Bolívar.
9. Chile


The Republic of Chile is the world's southernmost nation. The territory of the nation also includes Easter Island, which is located in Polynesia. Chile also has lands in Antarctica, called the Chilean Antarctic Territory.
10. Argentina


The Argentine Republic, or simply Argentina, is the second largest South American nation, after Brazil. The country is home to Aconcagua, which is South America's tallest mountain.
11. Paraguay


The Republic of Paraguay is a landlocked nation in South America. The Paraguay River divides the nation into two halves - the western Chaco region and the eastern Paraneńa region.
12. Uruguay


The Oriental Republic of the Uruguay is the second smallest South American nation, after Suriname. It is one of the only four countries in the world that is completely located south of the Tropic of Capricorn; the other three being Eswatini, Lesotho, and New Zealand.
Source: Author Matthew_07