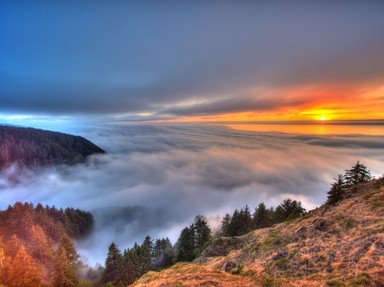 Have you ever wondered what was beneath our feet? Or how earthquakes occur? Or maybe you were wondering what type of rocks are there? You'll find out these answers in this quiz. Hope you have fun!

Quiz Answer Key and Fun Facts
1. Occurring on May 22, 1960, in which country was the most powerful earthquake ever recorded up to that time?

Yes it was in Chile. The unbelievable earthquake measured a shocking 9.5 on the Richter scale!

U.S.A had the second most powerful earthquake ever recorded. It occurred in Prince William Sound, Alaska on March 27, 1964. The destructive Earthquake measured a staggering 9.2 on the Richter scale!

The fourth most powerful earthquake ever recorded was a stunning 9.0 on the Richter scale! It occurred in Kamchatka, Russia on November 4, 1952.

The sixth most powerful earthquake which measured a mind-blowing 8.8 on the Richter scale! It occurred off the coast of Ecuador on January 31, 1906.
2. There are three types of rocks. Into which category does limestone fall?

There are only three types of rocks: sedimentary, igneous and metamorphic.

Igneous rocks are rocks that volcanoes blast out of the crater. They are very hard and they also have crystals on them. You'll find diamonds and gems. Some types of igneous rocks are basalt and granite.

Metamorphic rocks are very strange. These rocks are formed by pressure and temperatures to create a new type of rock. Some types of metamorphic rock are gneiss (pronounced nice) and marble.
3. How quickly do tectonic plates move?

This is about the same speed your fingernails grow. Though you may wonder why earthquakes happen when the plates move at this speed? It's actually quite simple. The plates rub against each other. Tension gradually increases, until they slip and the plates' energy is released. First, the earthquake begins underground in an area called the focus. Most of the damage happens directly above the focus on the earth's surface.

The surface is called the epicentre.
4. Who proposed the theory of Continental Drift?

Wegener's theory of continental crift is that continents move apart from each other. This is happening right now. Continental drift happens extremely slowly. Other people didn't believe Wegener and thought it was a load of rubbish. In 1960, geologists have discovered that his theory might be true. Today, we know that Wegener's theory is correct.

Lyell was a Scottish geologist who wrote a bestseller called "The Principles of Geography."

Richter and Gutenberg are the men who invented the Richter scale. This device is used to measure how powerful earthquakes are.
5. Earthquakes happen somewhere on Earth every 11 seconds.

Surprisingly, this is true! Though they mostly happen in places where people don't live or somewhere remote.
6. Sometimes, space debris makes it through the atmosphere and hits Earth. Where is the world's largest impact crater?

The Vredefort crater in South Africa spans about 160 km. It's old enough (estimated about two billion years) for much of the rim to have eroded, though, so it's not too dramatic to look at.
7. What is immediately below the crust?

The mantle is a very thick mixture of molten rock, magnesium, iron, aluminum, silicon and oxygen compounds. It is also nearly 2,000 degrees Celsius. The mantle is an enormous 2,900km thick and makes up most of the earth.

The Outer Core is about 4000 degrees Celsius and is made up of iron and sulphur. It is also a huge 2,200km thick.

The Inner Core is 2,500km thick and is about 6,000 degrees Celsius. Not to mention that it's made up of solid iron!
8. How thick is the oceans' crust?

This is nowhere near as thick as the crust on land. The land's crust can get up to 70km thick.
9. Uluru is Earth's largest rock?

Uluru is the second largest rock. It was also called Ayers Rock. Uluru is 348m high and has a circumference of 9.4 km! But Mt Augustus (Burringurrah) located in Western Australia is more than twice the size of Uluru.
10. How many major tectonic plates are there?

There are 52 tectonic plates but there are only seven large ones. The names of the large plates are the African Plate, Antarctic Plate, Eurasian Plate, Indo-Australian Plate, North American Plate, Pacific Plate and South American Plate.
11. In which ocean would you find the "Ring of Fire?"

The "Ring of Fire" is a circle of volcanic and seismic activity surrounding an enormous tectonic plate located in the Pacific Ocean. These areas include Kamchatka, the west coast of U.S.A, Alaska, everywhere in Indonesia and Malaysia, everywhere in New Zealand, the west coast of South America, Central America and many more areas.
12. Once, in China, an earthquake killed about 830,000 people?

This was a tragedy that happened in 1557. The poor people that died lived in caves.
13. Frederick Mohs created the Mohs' Scale. This scale ranges from 1-10 and tells you the hardness of a mineral. What is the hardest mineral in any scale?

As you might know, diamond is the hardest mineral on our planet.
The diamond is also a very precious mineral!
14. How old is Earth?

Back then, Earth was a scorching planet. A lot of meteors and comets fell on the surface. Earth is an ellipsoid shape and is also about 12,700 km across. Earth is mostly covered in water and is the only planet with known life.
15. The moon has tectonic plates.

Apparently no techtonic plates, but the moon has moonquakes. So scientists don't know why there are moonquakes on the moon. Will scientists find an explanation to this? Only time will tell!

I hope you had fun playing this quiz!
Source: Author uradenejkine 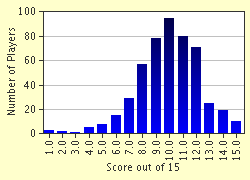 
Other Destinations
Explore Other Quizzes by uradenejkine