A quiz all about firsts in African American history.


Answer: Gone with the Wind

McDaniel won an Oscar for best supporting actress in "Gone With the Wind" in 1940 for her role as Mammy.
4. Who was the first African American major league baseball player?

In 1883, Fleetwood signed with the Toledo Blue Stockings of the Northwestern League. A year later the Blue Stockings joined the American Association, which was considered a major league. His brother Welday Walker also played in six games during the 1884 season while Moses played in 42. The Chicago White sox refused to play against him and this led to the color barrier which was broken by Jackie Robinson.
5. Who was the first African American US Secretary of State?

Booker T Washington's face appeared on a postage stamp in 1940. Washington was an educator and worked throughout his life for African American rights. He received honorary diplomas from both Dartmouth and Harvard.
9. Who was the first African American golfer to win a major?

Toni Morrison won the Nobel prize in 1993. She is renowned for her many novels including, "Beloved", "The Bluest Eye", and "Song of Solomon".
Source: Author susanlyn 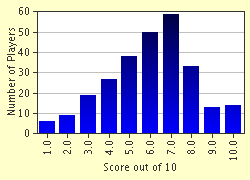 
Other Destinations
Explore Other Quizzes by susanlyn