The 1921 Greenwood massacre was a race riot that took place in Tulsa, OK. It is not my place to judge what happened here, just to record it and maybe encourage further reading about it.

Quiz Answer Key and Fun Facts
1. What was the Greenwood area of Tulsa, Oklahoma also known as in 1921?

The buildings on Greenwood Avenue in 1921 were home to the offices of almost all of the black doctors, lawyers, business owners, etc. of the black community of Tulsa, Oklahoma. It also housed these professional people, some of whom were millionaires. (At the time Tulsa was an oil boom town).

http://www.uaw-chrysler.com/resources/news.cfm?NewsID=2036
2. Why did Dick Rowland, who worked as a shoe shiner at a Main Street shine parlor enter the Drexel Building?


Answer: He was going to the "colored" restroom on the top floor

Separate but equal? Sarah Page, being a young white woman, would not have even spoken to Dick Rowland.
3. Why did a group of armed black citizens offer to help the police defend Dick Rowland against the lynch mob?


Answer: Because less than a year before the police had been unable to prevent to lynching of a young White man by a Black lynch mob

For information on the 1920 lynching of a white man by a black lynch mob, look up "Roy Belton". It's an amazing story in itself.
4. Why did some of the 1000+ white men gathered in front of the courthouse leave after the armed black men offered their assistance to the police?


Answer: They went home to get their own guns after having seen Blacks carrying guns

Most likely, this was the beginning of the end.
5. About how many people did the National Guard have to force away from their armory so they couldn't take their guns and ammunition?

The National Guard was already on alert due to the situation at the courthouse, and they had received warning that this crowd of people was coming to break in to the armory.
6. Why did most of the black men return to Greenwood?


Answer: The armed white men and the armed black men had opened fire on each other

Innocent bystanders who lived in Greenwood were shot and killed even though they had had no involvement in the standoff at the courthouse.
8. What was believed by many to be a signal to launch an assault on Greenwood?

The train whistle sounded at 5:00 am. Whether it was actually a signal or not is not clear. It was probably just a train whistle.
9. How do numerous accounts say that Greenwood caught fire?

The airplanes were six two-seater biplanes from WWI. The incendiary bombs story came from eye witness accounts. Although the existence of the planes flying overhead is verified, the dropping of incendiary bombs from them is not officially verified.
10. There were about 800 people admitted to local hospitals for injuries. The vast majority of those hospitalized were white. Why were so many more white people than black people admitted to the hospital with injuries?


Answer: Both of the black hospitals were destroyed in the rioting

With no place for injured Blacks to go, there is no record of Blacks being hospitalized for injuries. No way was a white hospital going to treat them.
11. What part did the KKK officially play in the Greenwood massacre?

There are no official records of the KKK having any part in this massacre. However, the KKK was heavily involved in the city of Tulsa within 6 months of the Greenwood massacre.
12. The Tulsa Reparations Commission was formed to award some kind of restitution for damages that took place in the 1921 Greenwood massacre. In what year was it formed.

It took 80 years for the city to take some action and accept some responsibility for what happened in the Greenwood area of Tulsa.
13. What evidence was NOT found by the Tulsa Reparations Commission of mass graves related to the Greenwood massacre?

Archaeological evidence was not found because the investigators had no authority to do archaeological research in the area.
14. In March, 2004, US District Judge James O. Ellison dismissed a lawsuit seeking to force the state and city governments to pay restitution to the survivors of the Greenwood massacre. Why was the lawsuit dismissed?


Answer: The time limit under the Statute of Limitations had expired

The time limit for filing Civil Rights lawsuits is two years.
15. What request by the city of Tulsa did Judge Ellison dismiss?


Answer: The request that the plaintiffs' attorneys be punished because they knew that the case was too old

Judge Ellison called the motion to punish the plaintiffs' attorneys the result of a "contentious attitude" that "has been destructive and wasteful of judicious resources". The plaintiffs' legal team was led by Charles Ogletree and Johnnie Cochran.
Source: Author chicochi3 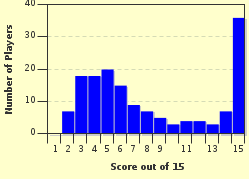 
Other Destinations
Explore Other Quizzes by chicochi3