They Put the Black in Black History Quiz

African Americans are an intregal part of United States history. Although at times many influential African Amercians are left out of history books these amazing people continue to pave the way for future generations.

Quiz Answer Key and Fun Facts
1. Billie Holliday, also known as "Lady Day", was one of the greatest jazz musicians of the 20th century. She is best known for the song "God Bless the Child" and also "Strange Fruit". What was this 'strange fruit' a metaphor for?


Answer: The lynching of African Americans

Billie Holliday's life was made into a film in the 1972 entitled, "Lady Sings the Blues". The film featured Motown star Diana Ross of Diana Ross and the Supremes. Holliday's life story was depicted brilliantly and gave insight into her abuse of heroin. Holliday paved the way for many jazz, blues, gospel and rhythm and blues singers of future generations.
2. In 1954, Brown vs the Board of Education demolished the legal basis of segregation in schools and public places. What was the name of the case that had originally put these practices in place?

The Plessy decision set the precedent that "separate" facilities for blacks and whites were constitutional as long as they were "equal." The "separate but equal" doctrine was quickly extended to cover many areas of public life, such as restaurants, theaters, restrooms, and public schools. Not until 1954, in the equally important Brown v. Board of Education decision, would the "separate but equal" doctrine be struck down.
3. Beah Richards is one African American who changed America. She began acting in the 1950's and continued until she died in September 2000. She starred in the 1967 film "Guess Who is Coming to Dinner". She was nominated for the oscar for her perfomance. What was the name of her character?

Richards also starred in the Oprah Winfrey's movie "Beloved" where she played the character Baby Suggs. She seemed to be type cast and always played the maid, mother or grandmother role.
4. Known as the "World's Greatest Gospel Singer", this artist was born in New Orleans on October 26, 1911. At the age of 16 she moved to Chicago where her gospel career would take off and change the sound of religous music everywhere. Who was she?

From the 1955 Montgomery Bus Boycott until her death, Mahalia was very prominent in the Civil Rights Movement. Very close to Dr. Martin Luther King Jr., she often performed at his rallies--even singing an old slave spiritual before his famous "I Have a Dream" speech at the March on Washington in 1963. She also sang his favorite song "Precious Lord" at his funeral five years later.
5. Who was the first (male) black actor to win the Oscar for Best Actor?

In 2001 Denzel Washington (for "Training Day") and Halle Berry (for "Monster's Ball") won the best actor and best actress Oscars - the first black actors to win since Poitier in 1964 for "Lilies of the Field".
6. What author traced his roots back to Africa and wrote a book which inspired a television mini-series?

Roots was one of the most watched programs in TV History. It was a huge success for Haley.
7. Who was the entrepreneur who built her empire developing hair products for black women?

She is credited with being the first Black woman and self made millionaire in America.
8. What African American Negro League baseball player was known as the Black Babe Ruth?

A tragic and legendary figure, Josh Gibson was the greatest power hitter in black baseball, pounding out home runs with regularity. Tales of his mammoth home runs became legend. In recorded at-bats against big league pitching, Gibson batted .426
9. Who is the African-American woman who was "Sick and tired of being sick and tired"?

Hamer co-founded the Mississippi Freedom Democratic Party.
10. Which Oakland, CA based group began in 1966 and practiced militant self defense of minority groups against the United States government?

The party was one of the first organizations in U.S. history to militantly struggle for ethnic minority and working class emancipation - a party whose agenda was the revolutionary establishment of real economic, social, and political equality across gender and color lines.
Source: Author reek76 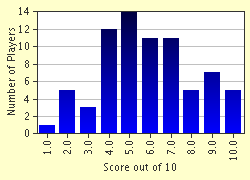 
Other Destinations
Explore Other Quizzes by reek76