These quizzes look at the events and leaders of the Civil Rights Movement in Black America.

Quiz Answer Key and Fun Facts
1. Following the American Civil War amendments were put in place in an attempt to ensure the rights of Black Americans. Among these amendments were the 13th, stating that slavery was to be abolished and the 15th, stating that the right to vote should not be denied. Despite these apparent advances there were still laws in place which effectively separated blacks from whites. What were these laws known as?

Powers held by state governments meant that Black Americans did not gain as much freedom as intended in the post civil war amendments. By 1900 only 3% of Black citizens in the south could vote. This was due to poll taxes and literacy tests put in place by the state governments in order to take advantage of the lack of money and literacy amongst the black population. Of course, many poor illiterate white Americans were exempt from these restriction measures due to legislation such as the Grandfather clauses which stated that if a man's ancestors could vote before the civil war, the man should not be prevented from voting.
2. As well as the restrictions on Black voters put in place by state governments, juries were dominated by whites. This allowed for the atrocities of white supremacist groups such as the Ku Klux Klan to go generally unpunished. What was the acronym for the group thought by the KKK to be superior?

'WASPS' stood for 'White Anglo-Saxon Protestants'. This belief was the 'justification' members of the group used for their actions.
3. For the situation to change, Blacks had to take action and white views had to change. One of the first Black activists prominent in the 1890s argued that blacks should become more economically useful. Many criticized this man, accusing him of being too willing to accept segregation as it stood. However, he did much to increase the educational opportunities for blacks in America. Who was he?

Washington rose high up in society, working with several presidents. His "Atlanta Compromise" argued that equality would come through hard work, not by force.
Marcus Garvey was a more radical activist who coined the phrase "Black pride". Although popular with many American Blacks, many disliked his theories of "the blacker the better".
Thurgood Marshall was best known as being the first Black man on the US Supreme Court.
Huey Newton was a co-founder of the Black Panthers, a radical organisation formed long after Washington.
4. The early 20th century seemed to raise hopes for Black civil rights. The Depression brought together both Blacks and whites with poverty as a common issue, furthermore the anti-Fascist feeling in America during World War II made Americans look at the ways they treated one other. The appointment of Truman in 1945 seemed to pave the way for reform. What was the document presented by Truman after the shocking finds of the civil rights committee into violence against Blacks in 1946?


Answer: To Secure These Rights

This document claimed that America could not be viewed as the leader of the Free World whilst Blacks were being discriminated against. Truman called for federal powers to eliminate segregation and lynching in America.
Many viewed Truman's actions as a cynical attempt to gain votes in the upcoming election. Many also claimed he did not do enough.
However, with a Republican Congress until 1948 and the issue of the Korean War in the 50s it is hard to see how effective legislation could have been passed.

Truman's speeches and executive orders in the late 40s aimed to increase the status of the Black population and the fact that many of his actions concerning civil rights were made before his need for the vote suggests he genuinely believed in the cause for which he was fighting.
5. The election of President Eisenhower seemed to offer less hope than with his predecessor. Eisenhower viewed Black rights with suspicion. However, Eisenhower inadvertently helped Blacks by appointing a particularly liberal Republican as Chief Justice in the Supreme Court in 1953. Who was it?

Action was taken soon after, as Warren overturned the Plessey v Fergusson ruling of 1896, stating that segregation generates inferiority and that it had no place in education. This set a precedent.
6. Which legislation concerned the following events? A third grade student is not allowed into a nearby "white" school, so his father went to the Topeka branch of the NAACP. In 1953, lawyer Thurgood Marshall presented the case to the Supreme Court, resulting in the overturning of the Plessey v Fergusson ruling in 1954. What is the case called?


Answer: Brown v Board of Education

Sweatt vs Painter was similar to Brown as it involved Heman Marion Sweatt (a Black student) who was refused entry into the University of Texas School of Law.
Browder vs Gayle was the case which followed the Montgomery Bus Boycott which effectively ended segregation on public transport in Montgomery.
Boynton vs Virginia again supported the verdict that segregation on public transport was illegal on public transport.
7. The Brown Ruling of 1954 faced fierce white resistance. Several white "citizens' councils" were formed, and by 1956 they had a quarter of a million members. They threatened businesses which complied with desegregation. As well as white public opposition, there was action taken by Southern senators and congressmen. Which document signed in March 1956 stated that those who signed would continue to fight the Brown Ruling?

Brown was extremely significant in setting a precedent for future legislative reforms for black rights. However, with strong opposition in the South and the fact that President Eisenhower never publicly supported the Brown ruling, segregation remained in 1956.
8. In 1955, the death of Emmett Till shocked many in America and was arguably the cause of the new Civil Rights Movement which followed. Some of the details of the murder were shocking and gruesome, especially the manner in which it was carried out, which left the body severely mutilated. What factor caused Emmett Till's murder to become a national issue?


Answer: His mother agreed to show a photo of the body in "Jet Magazine"

Till was killed by Roy Bryant and his half-brother so as to "teach the boy a lesson" for allegedly wolf-whistling at Bryant's wife.
Till was visiting the South from his house in Chicago.
The impact of Till's murder was shown in December 1955, when Rosa Parks refused to give up her seat on a bus to a white man, claiming she did it with Till in her mind.
9. The refusal of Rosa Parks to give up her seat for a white man led to the Montgomery bus boycott. However, it wasn't Parks herself who organized the boycott (as she was in jail). Which two figures were the main organisers of the movement?

Nixon was leader of the local NAACP branch and Robinson was the leader of the Women's Political Council (WPC). Both organisations did much to advertise the boycott to the local Black population, contributing massively to the success of the movement. Abernathy and King both became involved in the movement in the later stages.
10. One of the most significant outcomes of the Montgomery Boycott was the strengthened status of Martin Luther King Jr. Which of these most accurately describes King's role in the boycott?

King's involvement followed a recommendation by the local preacher Ralph Abernathy, due to the fact that he was such an effective speaker. This, along with the planning of the movement by the NAACP and WPC, led to the huge success of the boycott, as 90% of Blacks stayed off the buses on the day of Parks' trial.
Finally, the reaction from the North and the legislative reforms brought about by the boycott signalled the start of a new Civil Rights Movement.
Source: Author doublemm 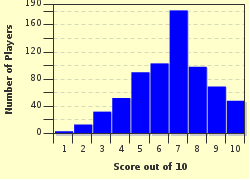