Many have heard of the first in African American history by individuals like Benjamin O. Davis, Sidney Poitier, Vanessa Williams, and Tiger Woods. Here are some first you may not be aware of.

Quiz Answer Key and Fun Facts
1. When did the first African American woman graduate from a nursing school in the United States?

Mary Eliza Mahoney (April 16, 1845-January 4, 1926) became the first African American professionally trained nurse in 1879.
Mahoney entered the New England Hospital for Women Training School for nurses in 1878, along with 40 other students. What followed was an extremely challenging and grueling 16 weeks of intensive training. Mahoney completed the course and was only one of four of her classmates to graduate and become a nurse.
2. In what year did the music Grammy Awards television broadcast first feature an African American host?

The Grammy Awards started in 1959, but was not televised until 1971. Prior to 1971, Grammy Awards dinner were held, usually in two or three major cities, on the same day, and the award presentations were made.

As the eighth artist ever selected to host the event, Queen Latifah joined the ranks of performers such as Andy Williams, John Denver, Ellen DeGeneres, and Rosie O'Donnell.

The show was broadcast for 21 years with a single party serving as host.

Queen Latifah (Dana Owens) was born on March 18,1970. As a performer, Queen Latifah's numerous award acknowledgements includes six Grammy Award nominations, a Grammy Award in 1993 for "Best Rap Solo Performer" for her single "U.N.I.T.Y", an Academy Awards nomination in 2003 for "Chicago", and an Emmy Award nomination in2007 for the television movie "Life Support".
3. Who was the first African American person to be invited by the President of the United States to dine in the White House?

History was made when on the evening of October 16, 1901, Booker T. Washington, in response to an invitation, dined with newly inaugurated President Theodore Roosevelt in the White House.

Roosevelt was known to often extend dinner invitations to influential and prominent Americans for discussions of current events and issues.

Washington, an educator, noted writer, and founder of the Tuskegee Institute in Alabama was highly regarded by Roosevelt for his thoughts and opinions. Washington's recently released autobiography, "Up From Slavery" (1901) was one of the more popular books of the time. The book was described in the April 1, 1901 issue of "The Washington Post" as "a book full of practical wisdom and sound common sense" and it added that "it may be read with profit by Whites and Blacks alike".

While many applauded the historical significance of the dinner between Roosevelt and Washington as a positive step for racial harmony in the country, there were those with harsh criticisms of Roosevelt's invitation to an African American to dine at the White House.
4. Who was the first African American entertainer to be featured in a regular role on a nationally broadcast radio program?

Veteran Vaudeville comedian and entertainer Eddie Anderson was given an opportunity in 1937 for a one time guest appearance on the popular Jack Benny radio program. Both Benny and the program's sponsors were pleased with the audience reception of the African American character on the show and extended several additional invitation for guest roles on the program.

It was Jack Benny himself who promoted the idea of having Anderson become a permanent member of the cast in the character of his valet Rochester van Jones, or, as Benny often referred to him on air, "Rochester".

Rochester soon became one of the most popular characters on the program, remaining in the role until the program (which moved to television in 1951) ended in 1965.

The popularity of the character made Anderson the highest paid African American entertainer in the industry.

Rochester was known throughout the run of the series for his raspy voice, his facial expressions, the characters quick wit, his the perfect comedic chemistry with Benny, or as he always referred to him, "Mr. Benny".
5. Who was the first African American actress to be cast as a "Bond Girl" in a James Bond Movie?

Released earlier in 1973 was "Diamonds Are Forever", starring Sean Connery as James Bond. It featured African American actress Trina Parks and "Thumper", who along with her partner "Bambi" (Lola Larson) who nearly manages to destroy Bond utilizing acrobatic fighting moves. Bond was able to get the upper hand in the fight when the ladies who had taken the fight to a swimming pool and were overcome when Bond held their heads under water.

Other African American actresses among the ranks of Bond girls have included Grace Jones as May Day in "A View To A Kill" (1985) and Halle Berry as Jinx Johnson in "Die Another Day" (2002).

A native of Winter Haven, Florida, Gloria Hendry was born on March 3, 1949.
6. In what year were the first African Americans permitted to enlist in the U.S. Army, becoming part of a regular military regiment?

In 1778, the governming assembly of Rhode Island decided to enlist slaves into the 1st Rhode Island Regiment due in part to not being able to recruit enough white men to meet the commitment set by the Continential Congress.

A vote on February 14, 1778 by the Rhode Island assembly allowed the enlistment of "every able-body negro, mulatto, or Indian man slave that chooses to do so ... and upon being accepted for service shall be discharged from the service of their master or mistress and be absolutely free".

A total of 88 slaves enlisted into the regiment, along with a number of free black men. In all, 140 African American men were a part of the 225 man military unit. Controversy over the enlistment of African American continued as many opposed having segregated companies in the Continential Army.

So strong were the objections that after June of 1778, no additional non-whites were enlisted and the regiment retained the designation of "The Black Regiment".
7. Who was the first African American named by "Time Magazine" as the "Man of the Year"?

In January, 1964, the editors of "Time Magazine" selected civil rights leader and advocate of non violence Dr. Martin Luther King, as its Man of the Year for 1963.

The annual honor was started in 1927, and is bestowed on the person, group, idea, or object that either in a positive or negative way, had the greatest influence on the years news.

The first man of color to receive the honor was Haile Salassie, Emperor of Ethiopia in 1935.

With the selection, King joined the ranks of recipients that included Charles Lindbergh, Winston Churchill, Chang Kai-shek, Charles de Gaulle, Pope John XXIII, and every sitting President of the United States, with the exception of Calvin Coolidge, since 1927.
8. In what year was the first African American Special Agent for the Federal Bureau of Investigation (FBI) appointed?

Prior to his appointment as a federal law enforcement officer, Jones served as a member of the Washington Metropolitan Police Department, rising from a foot patrolman to a motorcycle officer, to detective.

In 1917, Jones entered the U.S. Army, received training as an officer, was commissioned as a captain, and saw military action in France during World War I.

In his role as a special agent for the FBI, Jones was assigned several clandestine operations, infiltrating and investigating questionable groups such as Marcus Garvey's Universal Negro Improvement Association and the African Blood Brotherhood.

Jones resigned from the FBI on April 14, 1923, due in part to his cover being compromised when he was recognized as a former police officer. Throughout his tenure with the FBI, Jones often was concerned about his appearance as a light skinned African American man and his ability to convince others of his heritage.
9. When was this first gold medal awarded to an African American athlete for an individual Olympic event?

At the VIII Olympiad held in Summer of 1924 in Paris, France, DeHart Hubbard won the track and field first place gold medal for the running long jump, becoming the first African American athlete to win in an individual event.

Competing on Tuesday, July 8, 1924, Hubbard competed against 34 long jumpers who represented 22 countries. Hubbard won the gold medal with a final jump of 7.445m (24 feet, 5 7/64 inches). The jump fell short of the world record, but was the best in the Olympic event.

A star performer in track and field events, Hubbard equaled the world record for the 100 yard Dash with a time of 9.6 seconds in Cincinnati during a 1926 field event. Hubbard's accomplishments includes being a three time National Collegiate Athletic Association champion and being a seven time Big 10 Conference champion in track and field..
10. Jesse L. Brown is credited with a "first" in African American history and for the United States Navy. What event in October of 1948 sealed his place in history

Brown was commissioned as an ensign on April 26, 1949 while assigned to Fighter Squadron 32 aboard the USS Leyte.

At the onset of the Korean War, Brown successfully flew 20 combat missions in support of ground units, striking strategic military targets. During his 21st mission on December 4, 1950, Brown's F22 Consair aircraft crashed in hostile territory after being hit, possibly by enemy small arms fire. Brown survived the crash, but was trapped in his aircraft, finally succumbing to his injuries and the severe weather conditions.

Recording a dubious first in history, Brown became the first African American naval aviator to perish during a combat mission.

In another first, on February 17, 1973, the U.S. Navy commissioned the frigate, "USS Jesse L. Brown" marking the first time a US ship was named in honor of an African American. 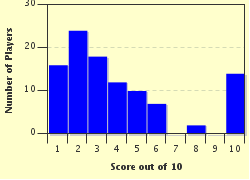 
Other Destinations
Explore Other Quizzes by MaceoMack