On December 1, 1955, an African-American seamstress made an extraordinary decision. By refusing to cede her bus seat to a white man, she helped put the wheels in motion to end segregation.

Quiz Answer Key and Fun Facts
1. Under the segregation laws, the city buses reserved the front rows for white riders, with the backs of the buses available to the community's African-Americans. On this particular day, Rosa Parks, a seamstress, was seated in the first row behind the whites-only section. How many people were asked to move so that a single white person could take a seat in that row?

The entire row of 4 people had to be cleared, by law, before the white man would take a single seat. Rosa Parks politely refused.
2. Parks was arrested and she appealed the decision, challenging the very basis of segregation. In the meantime, a bus boycott was organized. This would have a significant impact of the local bus system since 75% of the ridership was Black. In which city did this boycott take place?

The Montgomery Bus Boycott lasted an incredible 381 days! By the time it was ended, the U.S. Supreme Court had ruled segregation to be unconstitutional. By December 1956, the Montgomery buses were integrated.
3. An organization of activists and ministers was established to organize the boycott, and these local leaders called upon special young man to lead the group. Who was this man, who was fairly new to town, who had only lived in the town for just over a year at the time?

Montgomery Improvement Association elected him president. King had recently moved to Montgomery in the fall of 1954 to serve as pastor at the Dexter Avenue Baptist Church. Evers helped organize the first Mississippi field office for the NAACP. Malcolm X is credited for the substantial growth of the Nation of Islam in the early 1960s, and Schwerner was one of the three activists murdered in Philadelphia, MS, in the summer of 1964 while working for CORE.
4. The segregation customs and laws were commonly referred to as the "Jim Crow" laws. These began around the time of Reconstruction (following the Civil War) and continued through the 1950s. Who is Jim Crow believed to have been?


Answer: Both of these choices

It is widely thought that the term "Jim Crow" came about from a minstrel who mimicked a composite character of an old black man in a way that created a very negative stereotype. Some believe that the original minstrel who created this character, Thomas "Daddy" Rice, based the character's name on a slave owner who owned the slave he was mimicking. Whatever the source, the term was associated with derogatory stereotypes of African-Americans as well as the segregation laws that effectively kept these Americans from realizing their dreams.
5. Jim Crow laws affected the way of life for African-Americans in every possible way, including education, medical care, and even water fountains and lunch counters. Why do you suppose the bus systems were often the focal point of racial unrest?


Answer: Both blacks and whites had to use the same facility

In most cases, separate facilities were available to blacks and whites. This was not the case in public transportation, because it was just not feasible to run separate trains and buses. It was here that Jim Crow laws were often the most evident. Rosa Parks remembered, "The bus was among the first ways I realized there was a black world and a white world." The bus drivers were, in fact, given considerable latitude, along with guns, to enforce the segregation laws.

This bus was owned by National City Lines, unaffiliated with a utility company.
6. Parks' case was so significant because she was the first African-American to refuse to give up her seat on a Montgomery bus and be subsequently arrested.

Actually, there were two similar instances prior to her arrest. Parks' case was chosen as a test case primarily because it was believed she could garner support in the white community because she was so well respected.
7. This was not the end of the legal troubles that Rosa Parks had to endure. She was indicted again for another crime on February 21, 1956. For what was she arrested?

She and 89 other people were indicted for this crime. Parks and King were pacifists - it would never be for inciting a riot. Disorderly conduct was the charge involving the refusal to give up her seat on the bus.
8. Rosa Parks did not stop with the trials and tribulations surrounding the famous bus ride. She remains active in the civil rights movement and attended the 1963 March on Washington, the Selma-Montgomery March in 1965, and spoke to the Million Man March in 1995 in Washington DC. She also worked in the offices of U.S. Rep John Conyers (D-Michigan) from 1965-1988. Which of these awards did she not receive?

The Presidential Medal of Freedom is the highest honor that can be awarded a civilian by the U.S. Government. The Spingam Award is the highest honor given by the NAACP.
9. The bus on which Parks' rode when she was arrested was retired from service and sold. Later it was used for lumber storage and put out in a field. When it was eventually sold, there was a need to authenticate it as the bus that transported Parks. How was that done?


Answer: Notations on a newspaper clipping

Many of the retired employees of the bus company knew this bus was supposedly the Rosa Parks bus, however that alone was not concrete evidence. The owners of the bus had a practice of saving news items that concerned their busses, and the station manager's widow was able to provide a news clipping that contained the late manager's notes, which included the bus' coach ID (2857) along with the name of the driver who had Parks arrested (Blake).
10. The bus is on display at the Henry Ford Museum. Its restoration cost about $300,000, of which two-thirds was covered by a "Save America's Treasures" grant from the federal government. The bus is a Ford product.

Bus 2857 was built in 1948 in Pontiac, Michigan, by General Motors. First put into service by National City Lines in Terre Haute, Indiana, it was transferred in 1954 to Montgomery, where it remained in service until retired in 1971.
Source: Author woofi 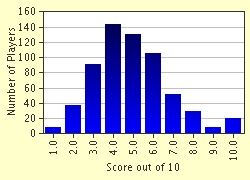 
Other Destinations
Explore Other Quizzes by woofi