This is Black History #2. Most of the questions are true and false. Good luck and have a nice day.

Quiz Answer Key and Fun Facts
1. The Dred Scott decision gave Congress the right to regulate slavery in the territories.

The U.S. Supreme Court declared that the issue lay beyond federal jurisdiction.
2. No African-American ever earned the Medal of Honor for heroism in the Civil War.

The Medal of Honor was bestowed on 16 Union army and 5 navy members.
3. In New York State, before the Civil War, a free black man could vote if he owned $250 worth of property.

The only requirement for all other males was to be 21 or older.
4. Slaves in early America could be bought and sold at the discretion of their masters.

Considered chattel property, slaves could make virtually no decisions about their welfare.
5. In 1860, a year before the start of the Civil War, there were about 4 million slaves in the South.

The number of slaves had grown from fewer than 30,000 in 1700.
6. There were no African-American newspapers before the Civil War.

In the North there were 17 African-American newspapers, devoted mainly to fight for equality.
7. Was the Freedman's Savings Bank established before or after the beginning of the Civil War?

In 1865, to support African-American businesses.
8. After the U.S. Constitution was adopted in 1787, the first Congress barred African-Americans from becoming naturalized citizens.

The first Congress also barred blacks from joining the militia and serving as postal carriers.
9. In the antebellum South, free blacks did not enjoy the right of trial by jury.

Nor could they testify against whites in court.
10. In what year was slavery abolished in the British Empire?

The trading of slaves was abolished in 1807. The British Navy applied this ban to transatlantic slave transport by *all* ships, regardless of whether they were British of foreign. The captains of such ships faced the death penalty.
Source: Author valerie0186 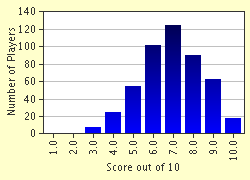 
Other Destinations
Explore Other Quizzes by valerie0186