This quiz is about a variety of notable African American firsts throughout American history. Have a good time with the quiz and good luck.

Quiz Answer Key and Fun Facts
1. Who was the first African American to serve as the United States Secretary of State?

Bunche was a political scientist and diplomat who received the 1950 Nobel Peace Prize for his mediation in Palestine in the late 1940s that lead to an armistice agreement between the Jews and Arabs in the region.
Bunche was also instrumental in the preliminary planning of the United Nations in 1944. He was also an adviser to the U.S. delegation for the "Charter Conference" of the United Nations held in 1948.
3. Who was the first African American to successfully perform open heart surgery?

A graduate of Chicago Medical School in 1883, Williams, with the assistance of five other surgeons, successfully repaired the torn pericardium of James Cornish, who had suffered a knife wound to the heart in 1893.
4. Who was the first African American to earn a Ph.D.?

Born on September 15, 1852 in New Haven, Connecticut, Bouchet was admitted in 1868 into Hopkins Grammar School, a private institution that prepared young men for Yale University. He graduated first in his class from Hopkins. He entered Yale University in 1870. Four years later, he became the first ever African American to graduate from Yale.

Best known for her contralto singing voice (a voice range somewhere between a tenor and a mezzo soprano) Anderson debuted at the New York Philharmonic on August 26, 1925, and scored an immediate success both with the audience and with the critics. In 1928, she sang for the first time at Carnegie Hall in New York.
Anderson's singing career was marred several time with race-based refusals for his to perform at certain prominent venues in the USA. On January 7, 1955, she became the first African American to perform with the New York Metropolitan Opera.
6. In 1940, I became the first African American actress to win an academy award. Do you remember my name?

For her performance as the maid character, Mammy, in the epic classic film, "Gone With the Wind" in 1939, McDaniels was awarded the 1940 Oscar for Best Supporting Actress.
McDaniel also became the first African American to attend the Academy Awards ceremony as a guest, and not a servant.
7. Who was the first African American National Football League (NFL) quarterback during the Modern Era Years?

Booker Taliaferro Washington (April 5, 1856-November 14, 1915) was honored with a stamp a quarter century after his death. His ten cent stamp went on sale in 1940 at Tuskegee Institute, which he founded when he was only 25 years of age. In 1946, Washington also became the first African American with his image on a coin, a 50 cent piece.
10. Who was the first African American explorer to reach the North Pole?

Matthew Alexander Henson (August 6, 1866 - March 4, 1955) was an American explorer who accompanied Robert Peary on the expedition to the North Pole in 1909. Due to his being African American and his status as Peary's employee, he never reached the same fame as Peary in an America where racist views were still common.

His contributions largely went unrecognized until decades later. On April 29, 1909, six men made a mad dash for the North Pole. They were (in order from first to last) Matthew Henson, followed by four Eskimos pulling Robert Peary (who was suffering from frost bite to the feet) on a sled.

Henson outran them all, becoming the first man in the world to reach the North Pole. Peary handed him the American Flag, which he planted at the site in the snow.
11. Who was the first African American professional Tennis champion?

Pinchback was appointed and served as governor of the State of Louisiana from December 9, 1872 through January 13, 1873, during the impeachment proceedings against the elected governor.
13. Who served as the first African American to serve as a U.S. Cabinet member?

Weaver served from 1966 until 1969 as Secretary of the Department of Housing and Urban Development in the administration of President Lyndon B. Johnson.
14. Who was the first African American to win the Congressional Medal of Honor?

Sgt. William H. Carney was awarded the medal for bravery during the Civil War. He received his Congressional Medal of Valor in 1900.
Sgt. Carney served with the 54th Massachusetts Volunteer Infantry, and took part in the July 18, 1863 assault on Fort Wagner in Charleston, South Carolina. He received his medal for saving the American flag and planting it on the parapet and holding it while the troops charged, He was wounded four times, but recognizing that Federal troops had to retreat, under fire, he struggled back across the battlefield returning the flag to Union lines.
With the primitive communications of the time, the flag was an important visual contact for the troops, and many Civil War medals were awarded for protecting and displaying the flag under fire.
15. Who was the first African American combat pilot?

Born in Columbus, Georgia on October 9, 1895, Ballard was denied entry into the U.S. Army Air Corps in 1917 because of his race. He served throughout World War I in the French Flying Corps. Assigned to the 93 Spad Squadron, he flew over 20 missions and is believed to have shot down two enemy aircraft.

He received the Legion of Honor, France's highest honor among many other decorations. On August 23, 1994, thirty-three years after his death and seventy-seven years to the day after his rejection for U.S. military service, Eugene Bullard was posthumously commissioned as a second lieutenant on the U.S. Air Force.
Source: Author AirBossJohnson 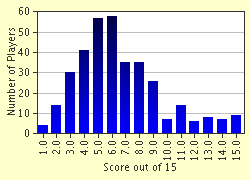 
Other Destinations
Explore Other Quizzes by AirBossJohnson