This is a very simple quiz about both people and animals that were first to accomplish specific events.

Quiz Answer Key and Fun Facts
1. Who was the first person to break the sound barrier?

Chuck Yeager was the first person to break the sound barrier. On October 14, 1947, while flying the experimental Bell X-1, he hit mach 1.07 at an altitude of 13,700m (45,000 ft). Yeager accomplished this event over the skies of Muroc Air Force Base, California. Interestingly, Yeager was able to break the sound barrier while nursing two broken ribs (when he fell off a horse two days earlier), having a broom handle as an extra lever to close the aircraft door secure (as he was in so much pain he couldn't close it unassisted); and shampoo rubbed over the canopy of the aircraft. To prevent the windshield from frosting over, Yeager's crew chief, Jack Russell, rubbed the rocket aircraft's canopy with Drene shampoo.

Mach 1, the speed of sound, is 758 mph (1,220 kph) at sea level. It decreases with altitude.
2. Who were the first two people to successfully fly a hot air ballon around the world in a non-stop, non-refueled flight?

On March 20, 1999, Betrand Piccard of Switzerland and Brian Jones of England became the first balloonists to successfully circumnavigate the earth on a non-stop, non-refuelled flight. It took them 19 days, in a balloon named the Breitling Orbiter 3, to fly from the Swiz Alps to Mauritania, North Africa.

However, on July 2, 2002, Steve Fossett became the first person to fly solo around the world in a hot air balloon.
3. What city was the first in the world to use traffic lights?

The first city to use traffic lights was London, England in 1868. These lights, invented by J. P. Knight, were near the House of Commons at the intersection of Bridge Street and George Street.
4. What National Football League (NFL) team was the first to complete an entire season undefeated?

The 1972 Miami Dolphins, led by head coach Don Shula, and fullback Larry Csonka, were the first NFL team to complete an entire season undefeated. The '72 Dolphins went 17-0 while being led by replacement quarterback Earl Morrall, and defeated the Washington Redskins 14-7 in Super Bowl VII. The starting quarterback, Bob Griese, returned for Super Bowl VII.
5. Who was the first person successfully to fly non-stop, solo across the Atlantic Ocean?

On May 21, 1927, Charles Lindbergh became the first person to fly solo across the Atlantic Ocean. Lindbergh, in an aircraft called "The Spirit of St. Louis," arrived in Paris, after a 33 hour flight from New York.
6. Who was the first U.S. astronaut to walk on the moon?

In 1908, Frederick Albert Cook, an American explorer, was the first person to claim to have made it to the North Pole. One year later Cook's claim was disputed by Robert Peary. However, the only real evidence is the two men's written records. Studies by scientists and the United States Congress discredited Cook's inadequate records and gave credit for first reaching the North Pole to Perry.
8. Who was the first person to win collegiate football's Heisman Memorial Trophy award in 1935?

Jay Berwanger was the first person to win college football's Heisman Trophy award. He won it while playing halfback at the University of Chicago. The Heisman Trophy, voted on by a poll of sportwriters and sportscasters, is presented annually by the Downtown Athletic Club of New York City to the nation's outstanding college football player.
9. Who was the first person to break the four minute mile?

On May 6, 1954, Roger Bannister became the first person to break the four-minute mile with a time of 3:59.4 in Oxford, England.
10. What was the name of the first horse to win the Triple Crown? 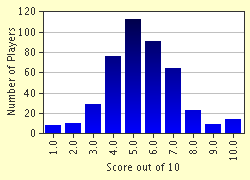 
Other Destinations
Explore Other Quizzes by Uga76