Back by popular demand (you know who you are), are the Aztecs. This quiz walks through there unique everyday lives, up to their final chapter! Enjoy! Tell me what you think!

Quiz Answer Key and Fun Facts
1. What a man wore depended on what?

A king, for example, wore a long flowing cape, jewelery, sandals, etc., whereas a man of very low standing wore only a loin cloth.
2. In the Aztec era, "baptism" was a very important thing which happened within days of birth. For their "baptism", what were little boys adorned with?


Answer: A bow, arrows and a miniature chest shield

After they got dressed up (I think they would have looked gorgeous, the little warriors!), the priest chanted to them, 'You have come into this world in order to give the sun the blood of his enemies to drink and to feed the soil with their bodies'.
3. What were the little girls adorned with for their "baptism"?


Answer: A spindle, a washing stone, and a pot

The priest chanted to her, 'Your role will to be the wife and mother of future warriors'. After this ritual, for both boys and girls, and the midwife that delivered them, would place droplets of water on their mouth, chest and head. Then the following would occur: If a boy: She would raise him to the sun four times. If a girl: She summoned the goddess Yoalticitl, the nocturnal healer, to bless the child.
4. What bird is the tribal god of the Aztecs?

The bird would speak to his people through priests.
5. What was tlachti?

This was a game played with a viciously hard rubber ball, on a court shaped like an I. Broken bones, crushed throats, and even death were common on the field.
6. What did all the older men do after a banquet?

Well, things never change do they?
7. A woman was NOT allowed to be a priest?

Women COULD be priests, as long as they did not marry. But they could leave the temple whenever they wished. GIRL POWER!
8. Omens played a big part in Aztec culture. What did a wolf crossing one's path mean?

These were other signs of misfortune: The hooting of an owl or a rabbit entering your house. So beware!
9. During the symbolic sacrificing of a young child (by means of drowning), what did it mean for the Aztec's land if the child cried?

This practice was associated with the water god, to bring an end to a drought.
10. When Cortez conquered Mexico, what became of many inhabitants of Tenochtitlan? 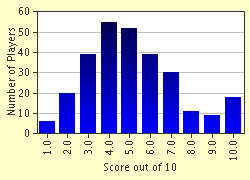