This quiz is about the Aztec economy, cuisine, and religion. I hope you enjoy!

Nobles were the highest class in Aztec society, while peasants were the lowest class. In the later stages 20% of people were peasants and 80% were warriors, artisans, and traders.
2. What was used for small purchases in the Aztec Empire?

The Cacao bean is mostly grown in South America and Africa. Many types of insects, fungi, and viruses can destroy the cacao beans that are produced by the tree.
3. In the Aztec religion there was a god of the dead. What his name?

According to Aztec religion Mictlantecuhtli dweled in Mictlan. There he would rule over the dead. The god is shown as having a body covered in human bones and wears a skull like mask over his face. Among the animals associated with him were the spider, bat, and owl.
4. What was the main staple food for the Aztecs?

Maize is a type of corn that is still grown around the world today. Other popular foods among the Aztecs were squash, beans, tomatoes, and chillies.
5. What is the name of the small shrimp that Aztecs pulled from Lake Texcoco?

Xocolatl is Aztec for "bitter water" and it was reported that an Aztec King drank 50 goblets of it daily. It was believed that Xocolatl was an aphrodisiac, that is, that it increased sexual desire.
7. Who was the god of Pan Mesoamerican life, wind, and the morning star?

The name Quetzalcoatl comes from the name of an mesoamerican bird and serpent. Quetzalcoatl is also known as the Feathered Serpent and is associated with the planet Venus.
8. How many Aztec gods were there?

Five of the Aztec gods were cultural and the others were for nature, creation, pulque, excess, maize, fertility, death, the underworld, and trade gods. There were many temples in the Aztec empire, especially in Tenochtitlan.
9. How many people were sacrificed over the course of four days for the reconsecration of the Great Pyramid of Tenochtitlan according to?

The Great Pyramid's reconsecration took place in 1487. The man who reported the number of prisoners was the eighth ruler of the Aztecs, Ahuitzotl. On the Aztec calender Ahuitzotl was born on 7 rabbit and died on 10 rabbit. For more information on the sacrifices you can visit http://strangeworldofmystery.blogspot.com/2008/04/aztec.html.
10. What was the capital of the Aztec Empire?

Tenochtitlan was a city on Lake Texcoco. How they made a city on the lake was that they made rafts, and put soil on top of the rafts, and grew trees on the rafts, so when the roots came to the ocean floor the raft would stay in place.
Source: Author nick888 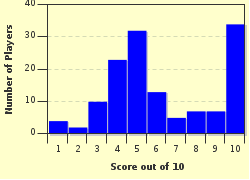 
Other Destinations
Explore Other Quizzes by nick888