Just a few questions about the great Aztecs' daily life. :) I hope you enjoy it.

Quiz Answer Key and Fun Facts
1. What was the name of the school attended by "common" people?

Telpochcalli was the equivalent of public school. It was attended by those who were going to be warriors. Calmecac was the school attended by children from wealthy families or the nobility.
2. When Aztecs divorced how was the property split up?

The Aztecs were very fair people. :)
3. What was the name of the main temple in the center of Tenochtitlan?


Answer: The Great Temple of Huitzilopochtli and Tlaloc

The stairs leading up this temple were so steep it was like "walking up to the Heavens". The stairs were often stained red due to the many sacrifices made in the temple.
4. How often did the poor bathe?


Answer: Once a day

The Aztecs were very clean people. Bath houses were like saunas. It was an enclosed room connected to the house. A fire would have to be set up from the outside near the wall, then the one bathing would enter the room. They would sit on the ground and use the roots of a plant that gave off a soapy lather, they would wash their arms, legs, bodies, etc., to loosen off any dirt. If Aztecs didn't have these bath houses they would simply bathe in lakes.
5. How many months were in an Aztec year?

There was 18 months with 20 days, which left five "empty" days. Those days were spent praying for the new year. Any child born during those days were thought to be unlucky and sacrificed immediately.
6. What did a bride wear when she got married?


Answer: Red feathers with yellow clay on her face

The bride was then carried from her home to her new home where she would get married.
7. How many wives and children did Montezuma II have?

He had two wives but many mistresses.
8. The macquauitl was a weapon often used in war. What was it made of?


Answer: It was a wooden club with obsidian wedges

The macquauitl was very sharp and was extremely painful when wedged into the skin.
9. How did the Aztecs buy things such as in food, daily supplies, etc.?


Answer: They mostly bartered but cocoa beans was generally their money

Albert Marrin wrote in his book "Aztecs and Spaniards: Cortes and the Conquest of Mexico" "Trade was by barter since the Aztecs didn't use money.(...) Cocoa beans were valuable in themselves and accepted in any purchase."
10. What was valued more than gold by the Aztecs?

The Aztecs valued jade more than gold because jade was the color of plant life, the color of life.
Source: Author akirakuran 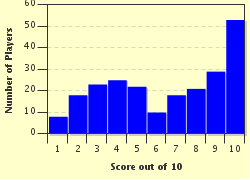 
Other Destinations
Explore Other Quizzes by akirakuran