Quiz Answer Key and Fun Facts
1. The Aztecs were known for their human sacrifices. In which way were humans sacrificed?


Answer: all three of these

The priest would grab the heart and tear it out, still beating. It would be placed in a bowl held by a statue of the honored god, and the body thrown on the temple's stairs.
2. What reason did the Aztecs think they had for sacrificing humans?


Answer: blood was necessary to make the world go round

Aztecs made sacrifices to make the world go round. The pyramid shaped temples had gutters down to the earth so the soil could soak up the blood. If there wasn't enough blood shed the sun would stop and eternal darkness would overcome the Aztecs.
3. Who or what killed Montezuma II?


Answer: his own people

The people of Tenochtitlan rebelled against the Spanish. Cortes ordered Montezuma to speak to his people from a palace balcony and persuade them to let the Spanish return to the coast in peace. Montezuma was jeered and stones were thrown at him, injuring him badly. Montezuma died a few days later.
4. Hernan Cortes conquered the Aztecs. What were his initial orders when he went to central America?


Answer: to establish trade routes with the local people

Velázquez's instructions to Cortes, in an agreement signed on 23 October 1518, were to lead an expedition to initiate trade relations with the indigenous coastal tribes. However Cortes was allowed to take emergency measures if necessary.
5. What was the capital of the Aztecs?

At the time the Spanish arrived in Tenochtitlan it contained 200,000 people, which made it was larger than any European city. It may have even been the largest in the world at that time.
6. By what name did the Aztecs call themselves?

The name Aztecah was made up by the German explorer, Alexander von Humboldt. In Nahuatl this means people from Aztlan. Aztlan was the place the Aztecs believed their ancestors where from. They never called themselves Aztecah but Culhuah, Mexicah or Tenochcah.
7. The big basalt heads in Mexico were built by the Aztecs.

The big Basalt heads were made by the Olmecs. The Olmecs were an ancient tribe from the coastal era of Mexico.
8. The last Aztec leader was Cuauhtemoc. What is the meaning of this name?

Cuauhtemoc became leader when he was eighteen. He wa a cousin of Montezuma II and the previous leader Cuitlahuac. On August 13, 1521 he surrendered to Hernan Cortes. He died on September 26, 1525.
9. At one point the Aztecs rebelled against the Spanish. The climax of this rebellion was the "Noche Triste" (Night of Sorrow). What made the night 'sorrowful'? It was the Spaniards, not the Aztecs who gave invented this name.

The Noche Triste occurred when Cortez attempted to break out of the city. Following Alvarado's slaughter of Aztec priests and nobles at a religious ceremony, the Aztecs besieged the Spanish quarters in response. Cortez returned, found the situation hopeless, and had to fight his way out of the city. The retreat cost the Spanish much life and much gold.
10. Did the Aztecs society know slavery?

Slaves were used for labour and sacrifices. The slaves were mostly prisoners of war, criminals and people who couldn't pay their debts.
Source: Author stengun 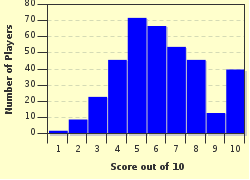 
Other Destinations
Explore Other Quizzes by stengun