Quiz Answer Key and Fun Facts
1. What was the most highly populated country in 1800?

The meaning of Megalosaurus is 'Great Lizard' and it was named by William Buckland in 1824.
3. What was the first city in Australia?

Although Sydney was founded on January 26, 1788, extensive urban developments did not start in Australia until the early 1800s.
4. What was the first Beethoven work?

Key: E flat major.
5. What country was the first to have a railroad open to the public?

The first railroad linking two towns and open to the public was the Stockton and Darliington Railway, opened on September 27, 1825 in the UK. However, in the early years some of the trains were horse-drawn. Before 1825 there were a number of short lines in Britain used for freight only.
6. What was the first country to issue adhesive postage stamps?

Postage stamps were first issued in 1840. (Some places in other countries may have issued adhesive stamps briefly for local mail only, however).
7. What was the most expensive Monet painting ever sold at auction in the 1990s?

This painting was sold at Sotheby's, London on 30th June 1998 for $29.52m.
8. What was the Civil War battle that claimed the highest number of lives?

The Battle of Gettysburg took place on July 1-3, 1863 and about 7,864 people were killed. In the the Battle of Antietam the overall number of casualties (that is, killed and wounded) was higher but the number killed was lower.
9. What was the first city in the world with a population of more than one million? 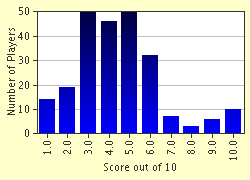 
Other Destinations
Explore Other Quizzes by TeaBrielle