Traveling back in time, here's a short quiz about some things that happened in 1970. Have fun, and let me know how you liked the journey!

Quiz Answer Key and Fun Facts
1. Apollo 13 was on its way to the moon when, on April 13, an explosion crippled the command module Odyssey. What was the name of the lunar module, which the crew used as a lifeboat during their harrowing journey back to Earth?

All of these were the names of lunar landers used during the Apollo program. Snoopy was used for Apollo 10 (May 1969) for a close-approach dress rehearsal for the first moon landing. Yankee Clipper was used on Apollo 12 (November 1969). Challenger was the last lander used, on Apollo 17 (December 1972). But it was Aquarius that helped save Apollo 13's crew.
2. Which team won Super Bowl IV, the last Super Bowl played before the NFL and the AFL merged?

The Chiefs manhandled the Vikings 23-7 to win the last of the four pre-merger Super Bowls. At the merger, the NFL had 26 teams, 13 each in the new American and National conferences.
3. Which of the following TV shows did NOT end its run in 1970?

"Bewitched" ran on ABC from 1964 until 1972. Both "Get Smart" and "I Dream of Jeannie" ran from 1965 to 1970. "Jeannie" stayed on NBC its entire run, while "Smart" ran four seasons with the peacock before moving to CBS for one final season. "The Survivors", created by novelist Harold Robbins, was on ABC for only fifteen weeks. Featuring such talent as George Hamilton, Jan-Michael Vincent, Lana Turner and Diana Muldaur, "The Survivors" involved a storyline revolving around sex and power (thanks to "Total Television" by Alex McNeil for information on "The Survivors").
4. Former astronaut John Glenn was elected to his first term as a US Senator, representing Ohio, in 1970.

Glenn lost the Democratic nomination that year to Howard Metzenbaum. He would later defeat Metzenbaum and go on to serve four terms in the Senate. During his final term, at the age of 77, he would become the oldest person to ever travel in space, spending nine days in space on board the space shuttle Discovery in 1998.
5. The Postal Reorganization Act of 1970 did which of the following?


Answer: All of these are true

Winton M. Blount was chosen by President Richard Nixon to head the Post Office Department as Postmaster General in 1969 and confirmed by the US Senate. By virtue of the Postal Reorganization Act, Blount was not only the last head of the Post Office Department, which was at that time a Cabinet-level post, he also was the first Postmaster General of the United States Postal Service.

As a government-owned service, the USPS moves billions of pieces of mail across the country every year (thanks to the US Postal Service website and "The World Almanac and Book of Facts 2003" for information on the Postal Reorganization Act).
6. Which TV show won the Emmy during the 1969-1970 season for Outstanding Comedy Series?


Answer: My World and Welcome To It

Based loosely on the life of American humorist James Thurber, "My World" starred William Windom as a magazine writer and cartoonist who secretly pines for a better, more exciting life.
7. Which of the following "cookie-cutter" stadiums opened for business in 1970?

Home to both the Pittsburgh Pirates and the Pittsburgh Steelers from 1970 until 2000, Three Rivers Stadium sat at The Point, the area where the Alleghany and Monongehela Rivers join to form the Ohio River. The stadium was imploded in 2001 to make way for parking for the Steelers' new home, Heinz Field.

These stadiums, along with Riverfront Stadium (later Cinergy Field) in Cincinnati and Busch Stadium in St. Louis, are known as "cookie-cutters", because they were round, concrete, multi-purpose arenas that were similar in appearance.
8. The 1970 Nobel Prize in Literature went to which famed author?

Best known for works like "Cancer Ward" and "The Gulag Archipelago", Solzhenitsyn didn't actually claim his Nobel Prize until 1974, when he was exiled from the country for his work. The other authors in this list also won the Nobel Prize in Literature during the 1970s- the American Bellow in 1976, the Australian White in 1973, and the Chilean Neruda in 1971.
9. A major earthquake, registering 7.8 on the Richter scale, shook up which South American country on May 31, 1970?

One of the most powerful earthquakes to ever strike the Southern Hemisphere, this quake in northern Peru claimed over 66,000 lives and caused half a billion dollars in property damage. The quake forced officials to reevaluate their disaster preparedness plans and building construction codes.
10. Which of the following hit songs was NOT released in 1970?


Answer: A Horse With No Name (America)

The year 1970 proved to be a tough one for music fans. In addition to the Beatles breaking up and Simon and Garfunkel parting ways, both Jimi Hendrix and Janis Joplin died of drug overdoses. Still, 1970 produced some great music. America, though, didn't debut until 1972, when they took "A Horse With No Name" to the top of the charts.
Source: Author cag1970 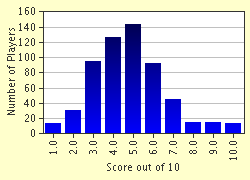