Seen the show? Now see what it was really like in the 1970s.

Quiz Answer Key and Fun Facts
1. 1972 and 1974 saw the Oscar going to "The Godfather" and "The Godfather 2" for best picture. A first in Oscar history where both the original and the sequel win the big prize. Who directed these two movies?

Francis Ford Coppola directed the two movies. He would only win the Oscar for directing for the sequel though. The "Godfather" movies were based on the best selling book by Mario Puzo.
2. The 1971 Grammy Awards saw this song and/or its performer(s) win five Grammys. What was the song, and who sang it?

Although all the songs mentioned were honored by the Grammy that year, "Bridge Over Troubled Water" was the big winner. It won Grammies for Record of the Year, Album of the Year, Song of the Year, Best Contemporary Song and Best Arrangement.
3. In 1971 the Red River Delta flooded due to heavy rains. The floods killed 100,000 people. What country did this disaster occur in?

The disaster occured near the city of Hanoi. The rains were due to several tropical storms that came through.
4. On July 28, 1976 China was hit by its worst earthquake in the 20th century. Twenty square miles of one city were completely destroyed. What city did the quake hit?

The official death toll of the Tangshan quake was 242,000; however it is believed that in fact up to 655,000 died.
5. In July, 1976 convention attendees in Philadelphia, PA were struck by a deadly disease. Subsequently, the disease was given the name of the convention. What was the disease?

180 Americans were struck with the mystery illness. The disease which was pnuemonia-like in its symptoms, also caused major organ damage. The disease has been identified as being caused by contaminated water droplets from the air conditioning and venting systems. It now is treatable but still dangerous.
6. In January of 1979, the Shah of Iran was forced to flee his country due to a revolution. Who replaced the Shah as leader of Iran?

The country has been run ever since very largely by mullahs and extremists.
7. This pro football team had quite a winning decade in the 1970s, winning four Superbowls. Which team was it?


Answer: All in The Family

"All in The Family" was the number one show in the U.S. for five years. It starred Carrol O'Connor, Jean Stapleton, Rob Reiner and Sally Struthers. It had two successful spin-off shows, "The Jeffersons" and "Maude".
9. Kermit the Frog, Miss Piggy and the rest of the Muppet gang debuted their show in 1976. Who was the creator of the Muppets?

Jim Henson's puppets first appeared on "Sesame Street", and then became more widely known with "The Muppet Show".
10. In the early 1970s, many people were seen participating in this fad. The participants had to be naked to do so. The fad even was seen at the 1973 Oscar telecast. What was the name of this eye opening fad?

Streaking was a fad of the early 70's, where people would disrobe and run naked. A streaker even struck at the 1973 Oscars, causing David Niven, the presenter on stage at the time to quip, "That man just displayed his shortcomings to the world." A song was even written about this "sport".
11. In 1977 a movie was released that would popularize white leisure suits and disco music. What was the name of the movie?

"Saturday Night Fever" is often credited with starting the disco rage, nationwide. It starred John Travolta with music by the Bee Gees.
12. This disco, opened by Steve Rubell in the late 70s in New York, was *the* nightspot to see and be seen at, but first you had to get inside those velvet ropes. What was this news making disco's name?

Studio 54 was the hottest ticket in town. Inside you might find regulars like Liza Minnelli, Mick Jagger, Andy Warhol and others. To get inside, one had to be admitted by the bouncers. Some said it was easier to get into Fort Knox than Studio 54.
13. Andy Warhol became a pop icon during the 1970s. His loft became a hangout for the beautiful people, and his art works, were much in demand. In the late 1970s he started a series of art works that were unusual in the technique that he used. How did Warhol create these works of art?


Answer: He and others urinated on them

Andy Warhol did a series of art works in the late 70's, in which he and others would urinate on the canvases after they had been painted. He is better known though for his silk screen pictures of celebrities and political figures.
14. Reggie Jackson, a baseball legend of the 1970s, became known by the nickname, "Mr. October". Why did sports writers give him this nickname?


Answer: Because of his World Series performances

Patty Hearst took part in the April bank robbery of the Hibernia Bank in San Francisco. This was in conjunction with her membership with the Symbionese Liberation Army, a radical group which had previously kidnapped her. The group was destroyed a month later after a raid on a house in south central Los Angeles that took the lives of six members. Ms.

Hearst was later convicted of the bank robbery and sentenced to 7 years in prison. However, family money prevailed, and after a sizeable contribution to the National Democratic Party, President Jimmy Carter commuted her sentence after she had served 22 months.
16. Who won the decathlon at the 1976 Olympics?

Bruce Jenner set two world decathlon records just prior to the 1976 Olympics. He easily won the Olympic events. He then had a career in public speaking and product endorsements.
17. In 1971 the U.S. Supreme Court would unanimously rule busing could be ordered in order to achieve desegregration in the public schools. One city in particular made national headlines for its riots and protests after court ordered bussing began. Which city was it?

Boston, MA was site of some of the worst protests and rioting because of court ordered busing. The protests came from all sides, with many parents, black and white, not wanting their children bused out of their own neighborhood.
18. In 1975 two assassination attempts were made on the life of President Gerald Ford. The attempts would take place just 17 days apart. Both would be killers were women. One was Sara Jane Moore, a radical leftist and doctor's wife. The other was Lynette 'Squeaky' Fromme, a member of a murderous cult. Who was the leader of the cult?

Although already in prison for life for the Sharon Tate murders, Charles Manson still had followers as part of his murderous cult. It is not known if Squeaky Fromme was ordered by him to kill the President, or if she just tried it on her own.
19. In 1976 America celebrated its bicentennial. The year long celebration produced such things as Disney's "America on Parade" events, several fast food restaurants used commemorative glassware, grocery stores issued Liberty Blue china; there were commemorative stamps and coins, and more. One of the main events took place on July 4, 1976 in Philadelphia PA. Here President Ford gave a speech attended by members of Congress, Mayor Rizzo, governors, and other distinquished guests. The master of ceremonies would be this actor best known for his biblical roles. Who was the actor?

Charlton Heston was the master of ceremonies at the bicentennial event. He had previously starred in the biblical movies, "The Ten Commandments" and "Ben Hur".
20. The 1970s saw many fads including Pet Rocks, platform shoes, mexican jumping beans, EST Therapy, Puka Shells, Daisy Dukes, and midnight screenings of the "Rocky Horror Picture Show". Another fad was the sayings, "Ayyii ..." and "Sit on it", started by this popular television figure. Who was the character and what show was he on?


Answer: The Fonz on "Happy Days" 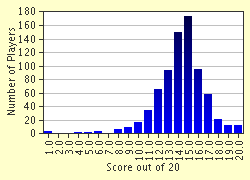 
Other Destinations
Explore Other Quizzes by routesixtysix