This is the second of my egocentric quizzes related to my birthday, January 13. It turns out that a lot of interesting things happened in 1970, the year I entered the world- see if you remember them.

Quiz Answer Key and Fun Facts
1. One of the saddest events in U.S. history occurred on May 4, 1970. National Guardsmen on a college campus fired into a crowd of protesting students, killing four. At which college did this occur?

In one of the most controversial events of the decade, four students protesting the US' incursion into Cambodia were killed by National Guardsmen at Kent State University in Ohio. The armed Guardsmen were called into the campus by Ohio's governor to "restore order" after the students, who had been demonstrating for several days, caused some damage.

At around noon, the Guardsmen used tear gas to break up a student rally when the protesters struck back, throwing rocks at the Guardsmen; the Guardsmen then fired into the crowd, killing four and injuring eleven. According to the students, two of the dead were mere bystanders.
2. Who was awarded the 1970 Nobel Prize for Literature?

This Russian novelist and historian was arrested in 1945 for criticizing Stalin and spent the next eleven years in prison, labor camps, and exile. His 1973 "The Gulag Archipelago", regarded as one of the greatest Russian works, resulted in his being charged with treason and expelled from the USSR.

His 1962 novel, "One Day in the Life of Ivan Denisovich", is based on his labor camp experiences.
3. The year 1970 was not a good year for music. The Beatles broke up, and both of these musicians died drug-related deaths.

Both of these singers died at the young age of 27. Jimi Hendrix, regarded as one of the best classic rock guitarists, was found dead in a London hotel room on September 18. Shortly afterwards, on October 4, blues singer Janis Joplin overdosed on heroin in a Los Angeles hotel.
4. On May 31, 1970, an earthquake killed more than 60,000 people in which country?

The earthquake, measuring 7.8 on the Richter scale, killed 66,794 people and caused $500 million in property damage. Over 400,000 people were left homeless by the avalanches, landslides, and floods that resulted from one of the largest disasters ever to occur in the Southern Hemisphere.
5. Which former head of state died at the age of 79 on November 9, 1970?

Charles De Gaulle, born in 1890, was one of Europe's most popular leaders. His career began in World War I, and he was named a Brigadier General in Word War II. He is known for instituting the Fifth French Republic and served as its first president from 1959 until his resignation in 1969. He died of a heart attack one year later, at age 79.
6. In 1970, Salvador Allende was elected president of which country?

On September 11, 1973, Allende and over 3,000 others were killed when a Chilean junta under General Augusto Pinochet overthrew the government and ruled until 1990.
7. Six days after I was born, on January 19, U.S. President Nixon nominated this man to the Supreme Court. However, he was rejected by the Senate on April 8.

Carswell, a senator from Georgia, was controversial due to his racial views. Nixon also struck out with his next choice, Clement Haynsworth of South Carolina. Finally, he scored a hit with his third try, Harry Blackmun of Minnesota, who was unanimously approved on May 12.
8. On May 15, 1970, which country was officially barred from all Olympic events by the International Olympic Committee?

South Africa was banned from the Olympic movement due to its policy of Apartheid, or racial segregation, which ended in 1994.
9. Which NHL defenseman set a record by scoring 20 points in the 1970 play-offs?

Bobby Orr of the Boston Bruins was one of the greatest defensemen of all times. In 1970 the 23-year-old set a record of 20 points in the season, with 9 goals and 11 assists. The Bruins also won the Stanley Cup that year, with Bobby clinching the Conn Smythe Trophy for Playoff MVP. He retired in 1979.
10. Which 1970 film won seven Academy Awards, among them Best Picture, Best Director, and Best Actor?

The film bio of World War II field general George Patton won eight Academy Awards. International headlines were made when George C. Scott declined his Best Actor award on the grounds that the Awards were a "meat parade". Scott, who appeared in films such as "The Hustler" and "Anatomy of a Murder", was probably better known for declining the Oscar than for winning it.
Source: Author bullymom 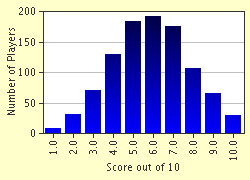