1979 was the year I was born, and a year of worldwide memorable events.

Quiz Answer Key and Fun Facts
1. The Three Mile Island accident of 1979, was a partial core meltdown of the nuclear power plant in Dauphin County. In which U.S. state is this?

The accident happened on March 28, 1979, resulting in the most significant accident in the history of an American nuclear power plant, but no deaths or injuries were reported.
2. President Jimmy Carter is attacked by what animal while on vacation in Georgia?

The rabbit incident happened while President Carter was fishing from a canoe; he spotted the rabbit swimming madly toward him. It was never precisely determined what the rabbit's problem was. However, there was speculation that it was fleeing a predator and was stressed.
3. On June 11, 1979 this beloved cowboy actor passed away. Who was he?

John Wayne was born Marion Morrison May 26, 1907. He played the lead in 142 of his film appearances. He was married three times, divorced twice, and had seven children.
4. October 16, 1979 twenty three people died in this country after a coastal town is hit by tsunami. What is the name of the city and country?

Nice is located on the French Riviera in Provence (department of Alpes-Maritimes) on the Côte d'Azur. Nice enjoys mild temperatures most of the year and rainfall is very moderate.
5. Who won the NASCAR Winston Cup championship in 1979?

This was Richard Petty seventh NASCAR Winston Cup championship. Neil Bonnett never won a championship, but had 18 career wins and 20 poles. Darrell Waltrip won three Cup championships. Cale Yarborough is one of only two drivers in NASCAR history to win three consecutive Cup championships.
6. In 1979 which world leader (known for his crimes against humanity) came to power?

November 5, 2006 Saddam Hussein was convicted of crimes against humanity, and sentenced to death by hanging. He was executed in a Baghdad prison on December 30, 2006.
7. Who was vice president of the United States in 1979?

Walter Mondale served as VP to Jimmy Carter. Prior to being vice president he served 12 years as a senator. In 1984, Mondale was the Democratic Party's nominee for president of the United States; he lost to Ronald Reagan. He also was appointed Ambassador to Japan.
8. Who was appointed Prime Minister of the United Kingdom on May 4, 1979?

Margaret Thatcher was the first woman to be elected Prime Minister of the United Kingdom. She was considered by the majority as a strong leader. She served as prime minister from 1979-1990.
9. Which movie won the Academy Awards Oscar for best picture?

Susan B. Anthony was the first woman to be honored by having her likeness appear on a circulating United States coin. She was a leader in the women's rights movement of the 19th century.
Source: Author montana2008 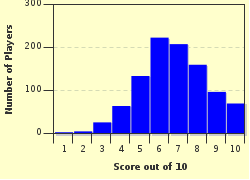 
Other Destinations
Explore Other Quizzes by montana2008