Apple of My Eye Trivia Quiz

A fun and interesting quiz about apples. Varieties and other trivial things about this popular fruit are explored. Good luck!

Quiz Answer Key and Fun Facts
1. Apples are one of the most popular fruits in the world, being produced by nearly 100 different countries on six continents. The country that produces the most apples on a year to year basis is also the country with the highest population in the world. Which is it?

Well over 60 million tonnes are produced worldwide each year. Of that total, China produces almost half with the United States coming a distant second, producing about 6% of the total.

The apple tree is the species Malus domestica, and is a member of the rose family (Rosaceae). These trees have grown in Europe and Asia for thousands of years. Apples were first brought to North America by European colonists during the seventeenth century.
2. Across the globe, there are over 7,500 varieties or cultivars of apple. Needless to say I would have to write an entire book to explore this aspect. One popular variety is the Granny Smith apple. In which nation that started as a penal colony were these little green beauties first cultivated?

Maria Ann Smith had a chance seedling in her orchard in Eastwood, New South Wales in 1868. It was a hybrid of wild and domestic apple. These apples start off yellow in colour then turn to green when ripe. They have a tart taste and are all purpose apples suitable for eating and cooking.

They were first sold in Great Britain in 1935 but were not introduced to the United States until 1972. The Granny Smith is also the standard logo for Apple Records music label.
3. One of the top selling apples in North America is the Red Delicious. This variety is unique in that more than forty mutations or sports have been patented and sold in the U.S. The largest production in the country comes from state of Washington but it did not originate from there. Which state better known for producing corn is home to the Red Delicious variety of apple?

The Red Delicious has a deep red colour and is shaped like a cone. It also has bumps on the bottom. This variety of apple is sold to eat directly and is generally considered to be a poor choice for cooking or for making cider. Some of the mutations of this apple have been marketed with the names "Red Chief","Red King", and "Oregon Spur".

This apple came from Peru, Iowa in 1880. It was discovered by a farmer named Jesse Hiatt who originally named the apple "Hawkeye", after the state nickname.
4. The Red Delicious and Golden Delicious varieties of apple are quite popular and have both been propagated and marketed by Stark Brothers Nurseries for over 100 years in the United States. Are these favourites related genetically?

The Golden Delicious was first found on a farm belonging to a farmer named Mullins in Clay County, West Virginia around 1900. The Stark Brothers purchased the land in 1914. It is thought to be a hybrid of the "Grimes Golden" and "Golden Reinette". This apple is yellow when ripe, soft texture and has a sweet taste. In addition to eating, it is also good for cooking and making apple sauce. In 1955, this apple was named the official state fruit of West Virginia.

The Red Delicious was first discovered in Iowa some years earlier in 1880. It has a crisp flesh and is generally a little larger than the golden. The hybrid parentage is unknown but genome studies have shown that these two apples not not related.
5. The Roxbury Russet variety of apple comes from the former town of Roxbury, Massachusetts. The town is now dissolved and is officially a neighbourhood of Boston. What is special about this particular cultivar of apple?


Answer: Oldest variety of apple bred in the United States

The Roxbury Russet is often referred to as "the roz". It's discovery dates back to the early 1600s during colonial times in Massachusetts. There are a few conflicting stories about its origin but it is consistently considered to be the oldest American variety. American president Thomas Jefferson planted many of these trees in the south orchard at Monticello plantation.

This variety is green with greyish spotting and it has a rough texture. It has qualities which keep it good through winter and is excellent for cider making. It has a high sugar content and ferments to 6% alcohol in cider production. Due to its appearance and increased demand for apples meant for eating rather than cider, it has lost much of its commercial appeal.
6. Most everyone has heard the old proverb, "an apple a day keeps the doctor away". Apples contain many vitamins and other healthy nutrients for people. Which of the following nutrients do apples provide a significant source of?

According to the USDA, apples contain 126 calories and are a significant source of dietary fibre. Apples have 2.4 grams of fibre for each 100 grams. The Vitamin A and zinc content in apples is extremely low and the iron content is only 0.12 mg. Apples also provide some nutritional value of Vitamin C, potassium, phosphorus, protein, calcium and riboflavin. They even contain antioxidants which helps reduce the risk of cancer and other ailments.

"An apple a day keeps the doctor away", was a statement made about the benefits of apples by Professor J.T. Stinson, a fruit specialist, at the 1904 World's Fair in St. Louis.
7. Which of the following species of insect poses the greatest threat to apple trees?

The codling moth is native to Europe and is a member of the Lepidoptera family of moths and butterflies. This species is the basis of the saying, "the worm in the apple". Females lay their eggs on the apples and the larvae burrow inside the fruit and feed for weeks. This moth also infects pear trees. In most regions they breed twice a year which of course makes the problem doubly tough to deal with.

Aphids, apple maggots, leafrollers and mites are some other pests that attack apple trees. They are controlled with pesticides. Timing is a critical factor in using pesticides. The "degree day method" is often used to determine the time which will see the highest insect growth and development, and therefore the most damage to crops.
8. Over the centuries, people have experimented with apples a great deal and have many uses for them. It has also been discovered that some varieties are better for certain things than others. The Bramley's Seedling, Gravenstein and the Rhode Island Greenling varieties of apple are best for which use?

The Bramley is a British apple from Nottinghamshire. It is green with some red and has a slightly tart taste. It is most commonly used in making pies and other dessert dishes. The Gravenstein comes from Denmark. They were brought to North America and are grown commercially in Sonoma County, California. They are excellent for making apple sauce. The Rhode Island Greenling is a yellow-green apple with a taste that is quite tart. In 1991, it was designated as the official state fruit of Rhode Island. This apple is very popular for pie making in the U.S.
9. The May Queen, Pitmaston Pineapple, and Cole's Quince varieties of apple are members of a group known as heirloom or heritage. Are cultivars in this classification considered rare?

Heirloom or heritage varieties of apple are those which at one point in history were mass produced but not any more. Today these varieties are grown by individuals and some are so rare they can only be found on abandoned orchards or just a few known trees. In order to be considered an heirloom, a variety must be open-pollinated and cannot be genetically altered.

There are numerous reasons for the decline of some varieties. Many hybrids have a seemingly better taste and appearance and have become better sellers over the years. Others may have been good for cider but didn't have much taste for eating and didn't cook well. The overall decline in cider popularity and production has made many apple varieties rare.

The May Queen apple originated in Worcestershire, England in 1888. It is a dessert apple that is crunchy with a sweet taste. The Pitmaston Pineapple is a small apple, yellow in colour and apparently tastes like pineapple, thus the name. The Cole's Quince variety was discovered in Maine in the U.S. around 1840. It is another dessert apple of medium size, yellow in colour with red spotting.
10. Johnny Appleseed was a famous American who became a legend in his own time. He was a nurseryman who introduced apple trees to different regions in Pennsylvania, Indiana, Ohio, and Illinois. He became a missionary and had a profound love of animals. What was his real name?

John Chapman was born September 26. 1774 in Leominster, Massachusetts. His father Nathaniel was a Minuteman who fought at Concord in 1775 and also served with George Washington.

After being an apprentice for some time at an apple orchard, he began to travel, planting nurseries in many counties. His apples were not sweet but sour. They were used for making cider and apple jack. He died in Fort Wayne, Indiana, in 1845. He owned more than 1200 acres of nurseries and over 15,000 apple trees, which he willed to his sister Elizabeth.

He carried his Bible everywhere he went, carrying little or no money living a subsistence lifestyle. He never married or had children. He preached the Swedenborgian gospel to people everywhere and was by all accounts loved and admired by most everyone he came in contact with.

John Lennon was a member of the Beatles musical group. John Denver was a country music singer and songwriter. John Montagu was an English statesman and the 4th Earl of Sandwich. He is credited with inventing the "sandwich" lunch food.
Source: Author johnnycat777 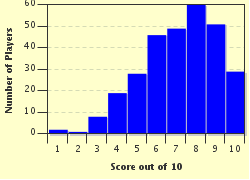 
Other Destinations
Explore Other Quizzes by johnnycat777