While the mango is well known as a tasty fruit, it has also managed to make its way into various types of food and drink. Here are some interesting tidbits related to this delicious fruit.

Share on Facebook
Share on Twitter
Share by E-Mail
Author
zorba_scank
Time
4 mins
Type
Multiple Choice
Quiz #
347,377
Updated
Dec 03 21
# Qns
10
Difficulty
Average
Avg Score
6 / 10
Plays
452
This quiz has 2 formats: you can play it as a or as shown below.
Scroll down to the bottom for the answer key.

Quiz Answer Key and Fun Facts
1. Given that the mango is native to the Indian subcontinent, it comes as no surprise that its name is derived from an Indian language. Which South Indian language can the etymological roots of the word 'mango' be traced to?

The Tamil word for the fruit is 'mankay' which became 'mangga' in the Malay language. The Portuguese traders who frequented the western coast of India referred to the fruit as 'manga'.
2. Which pattern, inspired by the shape of the mango, is named after a Scottish town though its origins can be traced to India or Persia?

The Paisley print resembles a teardrop or kidney. The pattern was introduced to the Western world by traders of the East India Company in the 17th century. Such was the demand for this print, that native production was unable to meet it. The town of Paisley in Scotland became the centre for large scale manufacturing of this textile leading to it being named after this place.
3. The mango is a popular fruit in South Asia. Which of the following countries has NOT designated it as their national fruit?

Bagoong is a condiment consisting of dried, fermented shrimp paste and salt. The mangoes eaten with the paste are usually unripe giving the dish a salty-sour taste. Bagoong can also be made using other types of fish.
5. Another refreshing drink made using mangoes is 'Aam Panna' - aam being the Hindi word for mango. Is this beverage prepared from raw mangoes?

Aam Panna is very popular during the hot summers in India. While the drink is mainly consumed in northern India, variations are also found in other parts of the country. It is considered to be an effective way to combat the intense summer heat.
6. Aamras, a sweet dish mainly consisting of mango pulp, forms part of the cuisine of which Indian coastal state?

Aamras literally translates to mango juice. While it may be eaten as a dessert, it is also commonly eaten as part of the main meal along with Indian breads like puris and chapatis.

Aamras is also found in Maharashtrian, Marwari and Rajasthani cuisine. The other incorrect options are all landlocked states in North India.
7. Mangoes are also used to prepare Murabba, a type of sweet jam pickle. In which Eurasian country did this fruit pickle originate?

Murabba is a generic term used to describe any form of sweet jam preserve. In Georgia, the jam is typically made using local fruits like cherries and strawberries. This form of mango pickle is sweet unlike the spicy pickles prepared in other parts of India.
8. Mangoes are used in the preparation of various jams, pickles, desserts and cool drinks. Are they also commonly used in the quintessential Indian dish, curry?

Various types of curry preparations using mangoes are found in the local cuisines of different parts of India. Some recipes also include seafood or chicken along with mangoes. It can also be cooked along with lentils.
9. From Asia, the cultivation of mangoes also spread to areas of Central and South America which had similar climates suitable for its growth. Which popular Mexican sauce includes variants prepared using mangoes?

Salsa, which translates to 'sauce' in Spanish, is a type of dip common to most forms of South American and Mexican cuisine. Generally consisting of tomato based spicy mixtures, recent variants may also include exotic ingredients like pineapples and sweet mangoes.
10. The mango belongs to the Anacardiaceae family which also includes various other tropical plants. Which of the following is NOT included under this plant family?

While both the mango and mangosteen are tropical fruits, they do not share any relationship botanically. Mangosteens belong to the Clusiaceae family and are native to Malaysia and Indonesia. The two also differ in their appearance with the mangosteen having a purplish skin and white fruit inside.
Source: Author zorba_scank

This quiz was reviewed by FunTrivia editor WesleyCrusher before going online.
Any errors found in FunTrivia content are routinely corrected through our feedback system.
Most Recent Scores
Jan 25 2023 : emmal2000uk: 4/10
Jan 13 2023 : Guest 165: 5/10 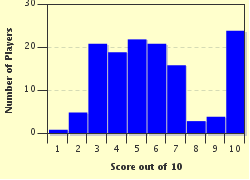