Do you find yourself intrigued by the pomegranate? No? Well come along anyway and let's find out about this fascinating fruit.

The Romans also knew the pomegranate as 'malum punicum' and 'malum granatum', which translate to 'punic apple' and 'grained apple', describing the many seeds inside the fruit. Romans used 'punic' because the best pomegranates came to them from Carthage.

The pomegranate has been around for millennia, and some scholars believe the fruit which Adam and Eve ate from the Tree of Knowledge was actually a pomegranate. The scientific name for the pomegranate is 'Punica granatum'.
2. With your pomegranate waiting patiently on the cutting board, you lift your knife in anticipation. You cut into the fruit and find--a central pit surrounded by edible flesh.

After opening the pomegranate you will find hundreds of beautiful garnet-colored juice-filled sacs called arils. Groups of these arils are separated by whitish membrane which is not edible. Each aril contains a seed surrounded by juice, and covered by a thin skin. Possibly the best method for extricating the seeds is to carefully separate the arils from the membrane in a bowl of water.

The seeds will sink to the bottom while the membrane floats to the top. The seeds can be eaten as is, used in cuisine, or pressed into juice.
3. Which novelty song by Ray Stevens included a mention of a woman eating a pomegranate?

That would be Fatima of course, who was the swingingist dancer in the sultan's whole harem. Ahab would ride out on his camel named Clyde to meet up with Fatima, who he would find "eating on a raisin, a grape, an apricot, a pomegranate, a bowl of chitterlings, two bananas, three Hershey bars, sipping on a RC co-cola listening to her transistor, watching the Grand Ole Opry on the tube, reading a Mad magazine while she sung, 'Does your chewing gum lose it's flavor?'" Ray Stevens scored a number five Billboard hit in 1962 with "Ahab the Arab".
4. Because of the similarity in appearance, which of these weapons owes its name to the pomegranate?

With the top part resembling the crown, and the shrapnel and/or gunpowder bringing the seeds of the pomegranate to mind, the grenade received its name from the French word for pomegranate. In Spanish the fruit is 'granada', in German it's 'granatapfel', and in Italian it's 'melograno'. Soldiers who were trained specifically to handle grenades were known as grenadiers.
5. If the pomegranate were to write a resumé, which of the following would it include as nutritional benefits?

In addition to the potassium and vitamin C, pomegranates also provide fiber and are low in calories. Eating the seeds is perfectly alright (if you want all of the fiber, you'll need to eat them), although some people prefer not to. Since pomegranates are ripe when picked, they don't continue to mature and can last quite a while when refrigerated.
6. The juice of pomegranates was originally used to make grenadine, a syrup used in various cocktails. Which well-known, non-alcoholic drink uses grenadine?

Shirley Temple cocktails are mainly for children, and usually consist of ginger ale or other light-colored soda, grenadine, a cherry, and sometimes orange juice. Grenadine gets its name from 'grenade', the French word for pomegranate. Few grenadine brands still use pomegranate juice, opting instead to use corn syrup, citric acid and food colorings. Alcoholic cocktails which contain grenadine include the Tequila Sunrise and the Singapore Sling.
7. The multipurpose pomegranate is, among other things, a symbol of fertility.

Due to the many seeds, the pomegranate has long symbolized fertility. In some areas, it still plays a part at weddings to ensure fertility for the newlyweds. Botanically speaking, the pomegranate is classified as a berry. It grows on a shrub-like tree which prefers a hot, dry climate.

The pomegranate is thought to have originated in Persia, and is found throughout the Mediterranean, the Middle East, parts of Asia and Europe. Throughout history, the pomegranate has also been revered as a symbol of rebirth, unity, everlasting life and righteousness.

The Bible, the Torah and the Koran all make mention of the fruit.
8. You talking about me? Which famous couple had a conversation about whether a nightingale or a lark was singing in a pomegranate tree?

Upon hearing a bird singing, Romeo was preparing to leave after he and Juliet spent their only night together as husband and wife. Juliet told him,

Romeo assured her it was the lark, which meant it was morning. Juliet didn't want to believe this since it meant that Romeo had to leave.
9. Pomegranates have crowns.

The pomegranate is usually a light reddish to purplish color, and somewhat hexagonal in shape. It's about the size of an orange, but looks like an apple, and has a crown at the base. The pomegranate has long been held in high esteem and was frequently used as a heraldic device. Both Catherine of Aragon and Maximilian I used the pomegranate as their personal emblems, and it was included in the design of Solomon's temple.

The fruit also appeared in Botticelli's 'Madonna of the Pomegranate', and was mentioned by Homer in 'Odyssey'.
10. In Greek mythology, the daughter of Demeter was abducted by Hades and taken to the Underworld to be his wife. Because she ate from a pomegranate while there, the daughter was destined to remain in the Underworld for several months of each year. What was the name of Demeter's daughter?

After Persephone was taken, a distraught Demeter searched everywhere for her, neglecting her duties as goddess of the harvest. With the Earth becoming barren, Zeus forced Hades to return Persephone to her mother. Because she ate from the pomegranate, Persephone became the goddess of the Underworld, remaining with Hades for part of each year. During the time she was away, Demeter's sadness caused the Earth to stop flourishing. When Persephone was with Demeter, the Earth was green and fertile, thus accounting for the changes in the seasons of the year.

Thanks for taking the quiz and I hope you've enjoyed your visit with the pomegranate :)
Source: Author Polaris101 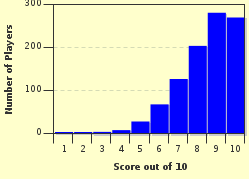