Many of us have eaten salads at one meal or another. But how much do you know about the greens that can make up these delightful dishes?

Quiz Answer Key and Fun Facts
1. This green was originally called Crisphead lettuce until its name was changed in the 1920s to reflect the chilly way in which it was transported across the United States. It has a higher water content and lower nutritional value compared to other lettuce varieties. What is its name?

Iceberg lettuce comes in a compact head. It was originally known as Crisphead lettuce but its name was changed to iceberg after it was shipped across America covered in ice within railroad cars in the late 1920s. Even though it is lower in nutrition compared to others in the lettuce family, it is still high in Vitamins A, K, and C.

It is also is low in calories and high in water content so makes a nice addition to a healthy diet. It can be served in a multitude of ways from leaves in a salad or sandwich to shredded lettuce in Mexican fare.
2. This vegetable, although considered a green, is actually a reddish color with white streaks running throughout the leaves. What is this member of the chicory family that has a slightly bitter flavor?

Radicchio is sometimes called Italian chicory. It is initially harvested in the winter after several hard frosts and actually finishes its growing in tubs of water in the dark. It is this unique form of farming that gives it a dark red coloring and a thin, yet tender, texture.

In Italy, where it originated, radicchio is often served simply grilled with olive oil. This food, high in antioxidants and vitamins, is also delicious in a salad, in a pasta dish, roasted, or sauteed.
3. This member of the cabbage family is considered a "superfood" due to its extremely high nutritional value. What is this dark green, leafy vegetable that tastes delicious while at the same time aiding in health?

Kale is a descendant of the wild cabbage and grows best in colder temperatures where it prefers a light frost. It comes in several different varieties including curly kale, dinosaur kale, and ornamental kale. Each of these kinds have varying shades of green and offers tastes from a slight bitterness to a hint of sweetness. No matter the variety, kale is packed full of nutritional benefits.

It contains over 100% of the recommended daily dosage of Vitamins A, K, and C. It also has powerful antioxidants and contains cancer-fighting minerals and substances. Kale can be eaten raw, can be steamed, can be included in a variety of dishes, and can even be eaten as a fun snack chip!
4. This leafy green vegetable is in the same family as beets and contains a multitude of vitamins and a large dosage of potassium. Perhaps Popeye the Sailor Man can help you figure out the name of this plant.

Spinach originated in ancient Persia and has been popular through the ages. In fact, Catherine de Medici brought some to France with her from Florence, Italy which contributed to the term "Florentine" when something is served on a bed of spinach. The leaves are a dark green in color and can be eaten raw in a salad or cooked either in a dish or alone. Spinach offers many health benefits with its high volumes of vitamins, magnesium, and calcium.

It also contains more potassium per serving than does a banana. Popeye may have eaten it out of a can, but it is also found in wraps, smoothies, omelettes, and dips!
5. This food is often referred to as "salad rocket" and has its origins in the Mediterranean. What is this low-growing, green plant that offers health benefits to aid internal organs, skin, and blood vessels?

Called "rocket", from the French word "roquette", the plant has its history in the Mediterranean. Ancient Romans considered it both a delicacy and a type of aphrodisiac. It is considered an annual herb and has long green leaves with lobes similar to a dandelion leaf. Along with a list of vitamins and minerals it contains a high amount of plant compounds called flavonoids which are linked to lowering blood pressure, reducing cholesterol, and improving blood flow through the body. Arugula's slight peppery flavor makes a great addition to a salad, to pizza toppings, to pesto, or to a sandwich.
6. This green is the one most commonly used in coleslaw. What is this fiber-rich vegetable that often comes in a round shape with multiple layers of leaves?

Cabbage has a long history throughout the world. The ancient Greeks thought wild cabbage aided in health problems. The cultivation of this hearty vegetable spread across Europe through the centuries and became a staple of many diets. There are three main varieties of it which include green, red, and Savoy. Cabbage is extremely rich in Vitamin C and fiber; in fact, it has more Vitamin C per serving than does an orange! Its fiber content is also an aid in fighting digestive issues.

Although it is most often found in the form of salads such as a slaw, it can also be used in soups, as a braised side dish, as an addition to stir fry, or in a juicer!
7. The star of a Caesar salad, this green also known as cos, has long leaves with ribs running through them. What is this versatile vegetable that is also full of Vitamin A, Vitamin C, and folic acid?

This lettuce has its history going back centuries to the Greek island of Cos where it got its original name. This sweet green grows quickly in cool climates and its outer leaves with the unique white ribs are harvested in early spring. Romaine lettuce contains high volumes of Vitamins A and C which are instrumental in acting as antioxidants in fighting cancer and heart disease.

It also contains large amounts of folic acid which can promote safe pregnancies. Romaine is definitely known for being the base of a Caesar salad, but it can also be used as a wrap around fillings, added to a healthy juice, or simply placed on a grill.
8. This relative of the sunflower has over 500% of the recommended daily allowance of Vitamin K per serving. What is this green whose dried roots and leaves make a wholesome tea?

Dandelions are more than just a pesky week in someone's yard! Parts of the plant can be brewed into tea for boosting health of kidneys and the bladder. The flowers can be utilized in making a citrus-infused wine. And the greens, although slightly bitter, also have a multitude of health benefits. With a huge amount of Vitamin K it helps strengthen bones and aids neuron activity in the brain. With its name coming from the French for "tooth of the lion", dandelions can be consumed in salads, soups, pilafs, or a nice cup of hot tea!
9. Swiss chard, with its colorful and vitamin-filled leaves, gets its name from the fact it originated in its native Switzerland.

Swiss chard is actually from the Mediterranean region and was even written about as early as the fourth century BC. It is a tall, green vegetable and is found in the same family as beets. It is full of vitamins and also contains syringic which is an enzyme used in helping with blood sugar regulation.

The large leaves can be chopped and added to soups, salads, or any recipe that calls for spinach.
10. Often used in British sandwiches for high tea, this aquatic green ranks among the top foods for providing high levels of nutrients for low caloric levels. What is it?

Watercress has a long history through the ages from being a staple food of Roman soldiers to treating patients in ancient Greece to being a key part of the diet in Victorian England. This perennial grows in shallow waters and has small, round leaves with flowers. Watercress, with its peppery flavor, has compounds to fight carcinogens and over 300% of a daily recommended dosage of Vitamin K.

Although it once served in lieu of bread for sandwiches in the 19th century, it now can be pureed into a soup, thrown into a salad, sauteed as a side dish, or added as a fun garnish to a dish.
Source: Author stephgm67 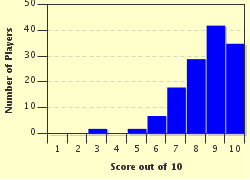