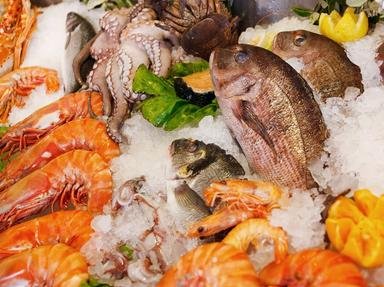 While growing up in Maine, my family had a tradition of eating lobster on special occasions such as anniversaries, birthdays, and family reunions. Here are 10 questions about eating lobster.

Quiz Answer Key and Fun Facts
1. Eating a lobster can be an adventure depending on how hard the shell is and a person's lobster eating experience. What are three basic items most commonly given in restaurants and used in homes to successfully remove the meat from a lobster?


Answer: A small fork, nutcracker, and a plastic bib

While some people may use other tools, the three basic ones are a small fork, nutcracker, and a plastic bib. The nutcracker helps crack open the shell. Some lobsters have soft shells and a person can crack and open it with just their hands. Other lobsters have harder shells that require a nutcracker and some effort.

The small fork helps the diner get into the claws and joints. The plastic bib protects clothing from lobster juice that squirts out while a person opens a lobster.
2. Lobster meat can be found in several places in a lobster, including the legs, tail, torso, and the two front claws. Where is the majority of lobster meat found (in a Maine lobster)?

Most of the meat is found in the tail and two front claws, while smaller portions are found in the torso and legs.
3. Lobster meat can be enjoyed plain, but many diners choose to dip the meat into liquids to add flavor. Which of the following would a person eating lobster most likely dip it in?

Many people eating lobster will eat it plain, or dip it in butter, lemon juice, or white vinegar. While this author has yet to see anyone eat lobster with ketchup, there have been some restaurants and ice cream makers in Maine who have experimented with lobster ice cream and lobster omelets.
4. Lobster can be used as an ingredient in a variety of dishes. If a person was to order "surf and turf" in a restaurant, and part of the main course was lobster, which of the following would be the other part?

"Surf and turf" is a main course in a restaurant consisting of a combination of seafood and meat. While a common combination is lobster tail and steak, "surf and turf" can be served with different seafoods and meats. Baked clams, salad, and soup may be served as appetizers, but they are not part of the main course.

In Australia, "surf and turf" is known as "reef and beef". (http://en.wikipedia.org/wiki/Surf_and_turf)
5. When breaking off the tail of a lobster, a person may encounter a reddish-orange, squishy substance where the tail meets the torso of the lobster. What is this substance called?

Coral is also known as the unfertilized eggs in a lobster. Some people eat the coral as a delicacy. Crustacea is the subphylum that lobsters belong to in the scientific classification system. The crusher is the name of one of the lobster's claws. Tomalley (also spelled "tamali") is the green squishy substance in a lobster.
6. A person eating a lobster may also encounter green, watery, squishy substance while breaking off a lobster tail. What is this substance known as?

Tomalley (also spelled "tamali") is actually the lobster's liver and digestive system. Some people eat the tomalley as a delicacy, but some nutritionists do not support this because the tomalley is where toxins from the lobster's diet could build up. Coral is the reddish substance in a lobster. Crustacea is the subphylum that lobsters are a part of in the scientific classification system, and the crusher is one of the claws of a lobster.
7. Which of the following methods can be used to cook a lobster?


Answer: All of these methods

Lobsters may be cooked in a variety of ways including boiling, steaming, grilling, and broiling. Some animal activists contend that none of these methods is acceptable since lobsters feel pain. Some scientists have performed studies that show that lobsters probably do not feel pain. The website below has more information on this topic.

http://www.cbsnews.com/stories/2005/02/14/tech/main673989.shtml
8. If a person went on a vacation to coastal Maine, he or she would likely find many souvenirs with pictures of lobsters that are red. The Maine lobster (also known as the American lobster) becomes red after being cooked. What color is a Maine lobster before it is cooked?


Answer: All of these colors

http://www.chilipaper.com/FWharf/Lobster/Lobster_FAQ/lobster_faq.htm#18
9. The Maine lobster and the spiny lobster are both caught and served in the United States. What two body parts of a lobster can you examine to tell the difference between the two types?

https://www.livelob.com/lobstergram/shop?method=static&page=Lobfaqs
10. Lobster dinners, a parade, live entertainment, arts and crafts, contests, amusement rides, and a Sea Goddess Pageant are all part of a big annual festival that takes place in Rockland, Maine. What is the official name of this festival? 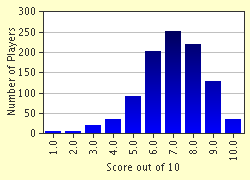 
Other Destinations
Explore Other Quizzes by mrsx04