This a little quiz about photography. Questions are related to names and advances in the process of taking a simple photo. Enjoy.

Quiz Answer Key and Fun Facts
1. Who can you say is the most famous inventor of early photography?

Though the first successful picture was developed in 1827 by Niépce, it took 8 hours to expose. Two years later Niépce joined Daguerre in a partnership, but he died only four years later. Daguerre is believed to be the "father" of photography, since by accident he exposed a plate in his chemical cupboard.
2. What is the name of the first successful photographic process?

The Daguerreotype was developed by Louis Daguerre. It was discovered by accident in 1835. In 1837 the process was fixed and it was announced to the public in 1839. The French government bought the rights to it in the same year.
3. How much time was required to properly expose a photo with the first successful process available?

Photos made with the first Daguerrotypes took 10 to 20 minutes to properly expose to available light. People were required to sit still for that long to have their picture taken. Rests were used to keep the subject still.
4. What new method or methods enabled a decrease in the exposure time needed to take a picture?


Answer: Other chemicals and wider apertures

Asking for people to sit under a hot sun for 15 minutes was too much. Combining new chemical processes and using lenses with wider apertures, the exposure time was reduced to more acceptable times, of 10 to 30 seconds.
5. As we all know, the first photographs were all monochrome. What process was used to get colour, before colour photography was invented?

Hand colouring was a very detailed and fine process. It required time and a lot of skill. Colours were applied with a fine brush and then fixed by simply breathing on the plate.
6. Who made the first advances in color photography?

James Clerk Maxwell began working with color in 1860, by taking three exposures, each one with a different color filter (red, green, blue), and then projecting the three images using three lanterns with the corresponding filters.
7. The theory behind the first tried color process was wrong.

It was not possible to record anything in the "red" and "green" exposures. The emulsion used at the time only responded to the blue end of the spectrum. It worked at the time because the green filter passed some blue light, and ultraviolet rays were exposed in the red plate.
8. In 1907, two brothers introduced the first viable colour process. Who were they?

Though other color processes were discovered earlier, the Lumičre Brothers were responsible for the first practical one. They developed the Autochrome plate in 1907. In 1909 Louis Lumičre was awarded by the Royal Photographic Society with the progress medal.
9. Who introduced the flexible film to the market?

The first box camera was produced by George Eastman in 1886, but it was way too costly. Two years later, in 1888, four years after he created the first flexible film, the first Kodak box camera hit the streets. It was an instant success. Finally, you could have a portable device to take along on your trips and take pictures of those precious moments.
Source: Author JPS 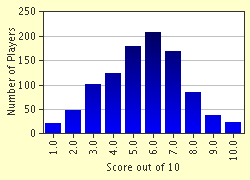 
Other Destinations
Explore Other Quizzes by JPS