I Shoot People - The Camera Quiz

Say cheese! This quiz is about cameras, photographs and the people who use and produce them and was the result of an Author Central challenge by runaway_drive.

Quiz Answer Key and Fun Facts
1. Nowadays, most cameras are made in Japan or other countries in the Far East. Which of these was NOT a Japanese camera manufacturer?

Kodak was a US company that traced its origins to 1892. It was founded by George Eastman and Henry Strong in New York State. The word Kodak was registered as a trade name four years earlier. The Eastman Kodak company was among the first to produce cameras for the 'man in the street'.

These were simpler, and based on roll film, rather than the complex photographic plate cameras that had been used before. Over the years, the Kodak company became noted for a wide range of camera and film types. Canon, Minolta and Nikon were all Japanese companies.
2. My very first real camera was a Zorki IVK. In which of these European countries was it made?

The Zorki was a 'rangefinder' camera and was closely modeled on Leica cameras. More than 2 million were produced, mostly for export, between 1946 and 1978. In rangefinder cameras, the viewfinder was not linked to the lens as was the case in SLR (single lens reflex) cameras.

When using telephoto lenses, it was necessary to add an auxiliary viewfinder/lens, usually mounted on the flash hot shoe. Both systems had their adherents and critics.
3. In one of the most unforgettable photographs of the 20th Century, a young girl was seen running naked down a road her face contorted with pain. In which war was the picture taken?

Inejiro Asanuma was the chairman of the Socialist Party in Japan and was addressing a rally in Tokyo when a man jumped onto the stage and stabbed him twice with a short sword. Asanuma died of his injuries. The picture was taken by Yasushi Nagao.
5. The conspiracy theorists say they were fakes, for the rest of us they were literally out of this world. What make of camera was used to take photographs when man first set foot on the moon in 1969?

Neil Armstrong used a Hasselblad Data Camera that had been designed to meet NASA standards. The astronauts had to be able to use the cameras through their protective gloves. The Carl Zeiss company made a special lens and Kodak developed thinner films. Between 1969 and 1972, 12 of these cameras were left on the surface of the moon. So if you fancy picking up a camera of outstanding quality for nothing, you know where to go.
6. Cameras at the movies: Which Hitchcock film masterpiece featured a photographer who used his camera to look into the lives of his neighbours, then began to suspect a woman had been murdered?

Made in 1954, James Stewart played a photographer who had nothing better to do than the to watch his neighborhood through his camera while recovering from a broken leg. Among those he saw were an attractive couple who lived nearby, then one day she could no longer been seen, and he was convinced the husband had murdered her.
7. Silenced: The truth about one of the most famous murders of the 20th Century may never be known because the chief suspect was shot dead at point-blank range by a lone gunman before he could testify. A photograph of that act became one of the most famous images of the century. Where was it taken?

Lee Harvey Oswald, the alleged assassin of John F. Kennedy, was shot dead at close range by Jack Ruby while in police custody in Dallas Texas on November 24 1963; Martin Luther King Jr was shot dead by a sniper in Memphis, Tennessee on April 3 1968; Anwar Sadat was shot dead in Cairo by a group of conspirators in October 1981; while Pope John Paul II survived a shooting in St Peter's Square, Rome on May 13 1981. Remarkably, those said to be engaged in the murders (and in the Pope's case attempted murder) were arrested. The picture of Jack Ruby shooting Lee Harvey Oswald was taken by Associated Press photographer Bob Jackson.
8. Cameras work by allowing light to fall on a recording medium (film or digital chip). For a correct exposure you need to balance the shutter speed and aperture. The width of the aperture is measured in f stops. At a shutter speed of 1/60th of a second, which of these would allow the most light through?

f/1.4 is not commonly used, though I love my 1.4 Carl Zeiss 50mm. Don't worry about the maths (I never have) all you need to remember is that by careful selection of the aperture and shutter speed settings, the same amount of light can reach the film or chip. With apertures such as f/1.4. f/1.8. or f/2.8. you get smaller depth of field than "slower" lenses. That is a problem for some, but an advantage for others, such as sports photographers. Depth of field, simply put, is the amount of the photograph in the background to the main interest that is in focus. (It is one of those mysteries that photographers use to bore non-photographers to tears).
9. Marie Helvin was one of the most glamorous models of her, or any other, age. She was captured on film in a book called "Trouble And Strife" by her then photographer husband. Who was he?

Trouble and strife was Cockney rhyming slang for "wife". Born in London in 1938, David Bailey came from a working class background, his father was a tailor's cutter and his mother a machinist. She brought up the family when her husband left. National Service was to be the making of Bailey.

While serving in the Far East, he bought a camera, and after his discharge, undertook several assistant photographer positions, before earning his own staff job at Vogue in 1960. He was to become one of the most famous photographers of the 1960s. Marie Helvin was born in Tokyo in 1952 of American and Japanese parents.

She married Bailey in 1973, but they were divorced 10 years later. "Trouble And Strife", a book of nude photographs of Helvin, was published in 1980.
10. Almost from the time they first came about, cameras have been used for military purposes. In 1905, the US Army experimented with aerial photographs. What kind of aircraft was used?

In 1905, the 'New York Times' reported that on April 21, a board of army officers went to the Indian Head proving grounds to carry out tests of a camera suspended below a kite and operated from the ground. Three exposures were captured at heights of up to 400 feet.

The 'Times' noted: "The idea is to use the camera for photographing an enemy's troops and defenses in actual warfare." Indian Head proving grounds were established in Charles County, Maryland, in 1890 and remained in use into the 21st Century.
Source: Author darksplash 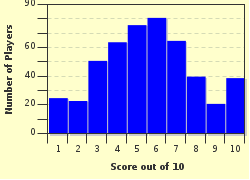 Related Quizzes
This quiz is part of series Categories in Other Categories:

One quiz for each of FunTrivia's categories... with a twist.