This quiz deals with the technical aspects of photography, including cameras, lenses, film, and digital photography. A "serious amateur" should know almost all of the answers to these questions.

Quiz Answer Key and Fun Facts
1. To properly expose a scene in full sun, one should set the shutter speed to 1 divided by the film speed and set the aperture to what?

Film speed is defined in terms of a full sun exposure at f 16.
2. To bring objects into focus over a greater range of distances from near to far, one should do what?

Decreasing the shutter speed may make the whole picture sharper if the camera is not held steady, but the shutter speed does not affect the focus. Focus range is extender by decreasing the lens aperture, which is done by choosing a higher f stop.
3. With the relatively short focal lengths and larger aperture camera lenses used with 35mm and digital camersa, what f-stop usually produces the sharpest images?


Answer: a few stops down from the maximum

The minimum aperature produces the maximum depth of field, but for objects in focus maximum sharpness is usually a few stops down from wide open. For long focal length small aperture lenses used with view cameras and other types of cameras, the sharpest aperture will be at small f stops.
4. In a photograph, what causes red eye?


Answer: light from a flash reflected from the back of the eyeball

Red eye comes from the red blood vessels in the back of the eye. Some flash equipment flashes a few times before the actual picture is taken so that the iris of the subject's eye will close down, minimizing the effect.
5. A polarizing filter may be used outdoors to do what?

Reflections tend to be polarized, so the filter can be used to cancel some of the reflected light. Blue sky may be darken because the light is polarized, but not because it is blue. Contrast may be increased, but it may also be decreased due to minimizing reflections.

The filter will require a larger aperture at the same shutter speed, decreasing depth of field as an incidental consequence.
6. A rotating lens camera is used to do what?

In a rotating lens panoramic camera, the film is wrapped around a drum. A lens is mounted opposite a slit in the drum, so that when the drum is rotated, the picture is scanned out on the film.
7. The f stop number is calulated as the ratio of what to what?


Answer: the diameter of the lens aperture to its focal length

The brightness of the image depends on how much light is admitted and how far it is focused. The film could be any size and it would not change the brightness of the focused image.
8. In monochrome infrared photography, how does foliage tend to be rendered?

Foliage reflects infrared well as so appears light. The blue sky has little red or infrared, so it appears quite dark.
9. In a digital camera, saving memory by increasing the image compression is most likely to degrade images of which of these subjects?

Compression depends upon leaving out fine details. It works best when there are area of continuous tones. The fine waves of the ocean have a great deal of detail that is potentially lost or distorted.
10. If you want to make pictures that have high contrast, you should do all of the following except which one of these?


Answer: make sure the sun is coming from over your shoulder

If the sun is coming from over your shoulder the lighing will be quite uniform, so there will be few shadows or shading to heighten the contrast.
11. All other things equal, camera shake will be minimized by having the shutter release located


Answer: on the front on the camera facing out

Moving the camera forward and back a little won't affect the image nearly as much as tilting or rotating the camera, so a front mounted shutter will tend to minimize the problem.
12. The objective of the Zone System is to do what?

The zones are areas of different exposure within an image which are associated with the characteristics of the film to respond to a limited range of bright and dark.
13. In digital photography, having a camera with a larger number pixels increases the capability for doing what?

More pixels generally means higher resolution, and higher resolution allows making bigger prints without showing individual pixels. This assumes the lens resolution is as good as the camera, which it usually is.
14. What is the type of shutter that uses a curtain immediately in front of the film?

A leaf shutter is inside the lens. There is no "moving leaf" type. The diaphragm control the lens aperture and has nothing to do with the shutter. At high speeds a focal plane shutter usually employs a moving slit, but that is not the name of the shutter type.
15. A 4" x 5" camera with a bellows, built on a rail, and with swing and tilt adjustments is an example of what type of camera? 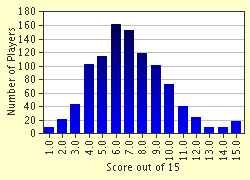 
Other Destinations
Explore Other Quizzes by OldOne