I Sure Wish I Had a... Trivia Quiz

Cooking can be an enjoyable pastime, if you have the correct utensils at hand. Over the years, kitchen utensils have evolved to make cooking and baking a pleasurable experience. In this quiz, match the utensil with the task at hand.

Quiz Answer Key and Fun Facts
1. To give my dish a citrus flavour, I need to add lemon zest to my ingredients. I have tried carefully slicing the zest from the lemon with a sharp knife, but it is still too coarse. I sure wish I had a ...

A lemon (or citrus) zester is a utensil which, when scraped over the peel of the fruit, removes the zest in thin ribbons, leaving behind the pith.
2. Nothing is as unappetizing as lumpy mashed potatoes! I have tried using a potato masher but still cannot get the smooth consistency I am looking for. I sure wish I had a ...

This nifty kitchen utensil works on the same principle as a garlic press, only on a much larger scale. The cooked potato is pressed through little holes in the base of the ricer. A potato ricer will ensure that your mashed potatoes are always lump free.
3. I have boiled my pasta, and am ready to remove the water, and rinse. I sure wish I had a ...

A colander is a bowl shaped utensil with holes on the bottom and around the sides, used for draining liquid from food, such as draining water from pasta or rice. It has a sturdy base, and is usually placed in the sink, into which the contents of the pot is carefully emptied, allowing the water to drain.
4. I want to make homemade potato chips, but cannot slice the potatoes thinly enough for them to curl when dropped into the hot oil. I want them to be no thicker than 1mm. My knife is just not doing the trick. I sure wish I had a ...

A mandoline is a device used to create slices which are exactly the same thickness. This time-saving utensil has a fixed blade, with interchangeable plates, over which the vegetable / fruit is dragged to create the perfect slice. Any firm fruit or vegetable can be sliced with a mandoline.
5. There is fresh fruit salad on the menu for dessert. Instead of cutting the melon into cubes, I want to serve it in little balls. I sure wish I had a ...

Shaped like a deep spoon, a melon baller is used to cut melon into balls when pressed into the fruit, and rotated. This utensil can be used on any firm fruit.
6. After removing the pizza from the oven, I start cutting it into slices to serve to my guests. As I cut the pizza with my chef's knife, it drags the ingredients along with it. This is hopeless! I sure wish I had a ...

A pizza cutter or pizza wheel has a sharp round blade which pressed down vertically on the cooked pizza. The wheel turns as it is pressed down on the pizza, slicing though the pizza base and toppings, rather than dragging them as you would with the back and forth motion with the knife.
7. Everyone knows that the key ingredient in meringues is egg whites beaten until they form peaks. This is time consuming, and very tiring! And when I bake meringues, I usually have other things that need to be done. I sure wish I had a/an ...

The electric mixer is probably the most versatile kitchen appliance. Used for mixing, whipping, kneading and beating, this time-saving device is the one appliance that no kitchen should be without!
8. I want to make a chicken schnitzel coated in seasoned breadcrumbs. I have chicken breast fillets, but need to pound them out to flatten them. This will ensure that they cook through quickly. I sure wish I had a ...

A meat tenderizer is a hand held utensil. It has a metal block at the end of the handle. The one side of the block has rows of triangular tenderizers, and the other is usually smooth. This useful device can also be used to tenderize tougher cuts of meat, making it easier to digest.
9. The chocolate cake mixture is ready to be poured into the prepared cake tins. The bowl is still coated with mixture. I need a utensil to remove the mixture from the sides of the mixing bowl, and get it into the cake tins. I sure wish I had a ...

A bowl scraper usually made of silicone rubber, but sometimes plastic, metal and even wood. Used to remove the last bit of mixture from the receptacle, it can also be used to empty jars.
10. The recipe I am following calls for herbs and spices to be ground, and added to the olive oil already simmering over a low heat. The recipe claims that the herbs and spices, after being ground, will release more flavour and aroma if crushed. I sure wish I had a ...

Originally used by pharmacists to crush ingredients when preparing a prescription, this utensil has barely changed over the centuries. A mortar is a heavy based bowl, made of hard wood or stone, and a pestle is a bat( as in baseball bat) shaped object made of similar material. The ingredients to be crushed, ground or mixed, are placed in the mortar, and ground with the pestle.
Source: Author lmoodie101 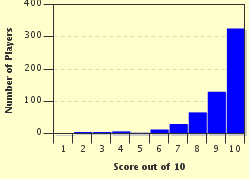 
Other Destinations
Explore Other Quizzes by lmoodie101