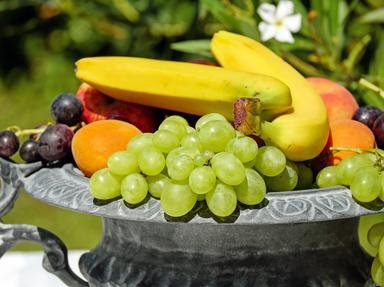 All these dishes, both sweet and savoury, have one thing in common - they either contain lemons or limes.

Quiz Answer Key and Fun Facts
1. Key lime pie is an American dessert which uses lime juice in its filling. From which state does it originate?

Key limes come from the Florida Keys, hence the name, and are smaller and yellower than conventional limes. The filling is made with condensed milk, key lime juice and egg yolks, with the whites being used to make a meringue topping. Traditionally, the filling is left to thicken - a chemical reaction between the lime juice and condensed milk causes this - but due to concerns about raw egg consumption, it is customary to bake the pie instead.

The pie is the official state pie of Florida, and an annual Key Lime Festival takes place inKey West over the 4th July weekend, celebrating the fruit.
2. The picture here is of a lemon tart. One variety of lemon tart, using boiled lemons, is named after a northern city - although it actually originates from a recipe book from Dorset - and is often sold with an iconic bird adorning its top. What is this tart called?

The bird in question is the Liver Bird, which adorns the Liver Building and the crest of Liverpool Football Club. You can get a bespoke pastry cutter to make the shape of the bird, or place a flat template on the top of the tart and dredge sugar over it, leaving a bird-shaped outline.

The recipe was originally found in a family cookbook in Evershot in Dorset, and has been adapted for modern use by the Liverpool musician Gerry Jones, with the intention of making it as well-known as the Manchester tart (yes, it is a real pudding, but it has jam and coconut in it and is more like a Bakewell tart).
3. The leaves of the Citrus hystrix fruit are a popular choice of flavouring in south-east Asian cuisine, in countries such as Cambodia and Thailand. By which name is Citrus hystrix more commonly known?

'Makrut lime' is used as an alternative to 'kaffir lime', due to the negative connotations of the word 'kaffir'. Because of the strong fragrance emitted by the leaves when crushed, they are used in perfume and shampoo (as they are believed to deter or kill head lice), as well as cooking. Dishes such as coconut curry soup or tom yum use the leaves for flavouring.

The peel is an ingredient in curry paste, while the fruits themselves are sold as crystallised or candied fruits in Cambodia.
4. Avgolemono is a sauce / soup made from eggs, lemon and chicken broth. From which European country does it originate? The foods in the picture might give you a clue!

'Avgolemono' literally means 'egg lemon' and can either be a sauce or a soup. As a sauce, it can be used as a base for stews, or as a sauce for dolma (stuffed vine leaves). As a soup, it contains chicken broth, and often pasta or rice. It is thought to be of Jewish origins, with orange or pomegranate juice or verjuice being used as a souring agent instead of lemons. (The other foods in the picture, incidentally, are moussaka, souvlaki - lamb kebabs - and pilaf.)
5. Ceviche is a dish made with raw fish cured in lime juice. Of which country, home of Macchu Picchu, is it the national dish?

Ceviche is thought to be an import from Granada, and the traditional Peruvian variety is made with raw fish such as sea bass, cured in lime (sometimes orange) juice and seasoned with onions and chili peppers. Sweet potato and corn on the cob are traditional accompaniments, while some regional varieties may include garlic, toasted corn or a kind of seaweed called yuya. Because it contains raw fish, it is supposed to be eaten on the day it is made.

Many varieties of ceviche exist around the Americas; for example, the Chilean variety uses mint and coriander as garnishes, and halibut or toothfish, while the Panamanian variety uses peppers, lemon juice and celery.
6. Lemon chicken is a dish often found in mainstream Chinese restaurants, featuring battered chicken in a lemon sauce. However, is it actually a traditional Chinese dish?

Lemon chicken consists of chicken coated in batter or breadcrumbs and served with a thick lemon sauce containing corn starch, and other ingredients such as soy sauce and ginger. The version you'll usually find in Chinese restaurants was invented by Lee Lum, a Chinese chef who worked at a New York restaurant called Pearl's in the '70s.

It is said to have its origins in Cantonese cuisine, but is very much a Western invention, although you can get it in China as well now.
7. Which Cuban cocktail, pictured here, contains mint, lime, white rum, sugar and soda water?

More specifically, the Cuban variety either uses yerba buena or spearmint. Mint leaves and lime slices are also used as garnishes. Some hotels in Havana also use Angostura bitters. It is one of the many cocktails on the IBA Official list, compiled by the International Bartenders' Association for use in the international World Cocktail Competition, and is hugely popular in England and France.
8. This British pudding contains a lemon encased in a rich suet pastry, and a thick caramelised sauce pours out when cut open. What is it called?

The 'pond' bit comes from the pond of sauce that the pudding ends up in when cut open, due to the combination of the butter, sugar and lemon inside it, which also candies the lemon. There is a variety called Kentish well pudding which contains currants.

Originally, the pudding contained a stick of butter instead of a lemon, but Jane Grigson's 1974 recipe used a lemon as filling, and the use of lemons in the pudding has now become more commonplace. Some recipes even use lemon zest in the pastry.
9. When drinking tequila shots, it is customary to have a slice of lime and what other condiment handy?

WikiHow's guide to drinking tequila shots - known as tequila cruda - advises that you lick your hand before placing salt on it, to make the salt stick. You hold the lime in one hand and the shot glass in the other, lick the salt, knock back the tequila, and then suck on the lime.

This helps to counter the burning taste of the spirit. Some countries use cinnamon and a slice of orange instead of salt and lime when drinking gold tequila.
10. What makes a lemon chiffon pie, pictured here, a chiffon pie?

You can tell a chiffon pie from its filling. The filling of a chiffon pie should be light and airy. For lemon chiffon pie, egg whites are folded into lemon curd, with gelatine being used as a thickener, although the original recipe suggested cornstarch. If you're using cream instead of egg whites, you've got a cream or mousse pie.
Source: Author Kankurette

Hobbies is my favourite category for photo quizzes, as it means getting to look at lots of pictures of delicious food. Here are my Hobbies photo and match quizzes (although be warned, one of them is a bit gruesome!)