Only in the Philippines 1: Street Foods Quiz

This is the first of a series of quizzes I have in mind. This is my way of showing my love to my country. Good luck! have fun I hope this will help you know more about the Philippines.

Quiz Answer Key and Fun Facts
1. What is the local name for a favorite street food which is hard-boiled duck egg with fetus?

Balut is believed to give strength when eaten. A hard-boiled duck's egg is called "balut penoy".
2. What is the collective name for grilled chicken and pig internal organs?

The most popular "isaw" in the Philippines is the chicken intestines. They can also use pig's intestine. It is usually marinated just like for barbeque.
3. What is the local name for the street food made from chicken and pig's blood cut into cubes and is usually grilled together with isaw?

It is fondly called betamax because of its cube shape and black color. We are familiar that betamax is used as a tape recorder for movies. However, when it comes to street food here in the Philippines, betamax has a different meaning.
4. The head of the chicken is also a popular street food in the Philippines, which is also grilled, how is it called?

It is colloquially called helmet simply because it refers to the head, chicken-head in particular.
5. How about the grilled feet of a chicken, what are their street food name?

From the popular Adidas sneakers, local street vendors call the grilled chicken feet that name. Adidas is considered more trendy than any other brand of shoes here in the Philippines.
6. Hard boiled chicken egg dipped in orange batter is also an all time favorite among the Filipinos, how do they call it?

While balut contains fetus, quekquek is a pure chicken egg. However, a hard-boiled duck egg is called balut penoy.
7. Quail's egg dipped in orange batter is a small version of tokneneng, what is its name?

While quekquek is the large version (the big sister), tokneneng is the small version. Tokneneng is taken from the word "nene" which means little sister.
8. What is the most popular and certainly the best seller among all the Philippine street foods?

The most original among all the street foods here in the Philippines is the fish ball. Although it isn't shaped like a ball because it is circular and flat and it isn't hundred percent fish because it contains more flour than fish, it is popularly called fish ball. Sauce for fish comes in different varieties - sweet and sour, chilli and vinegar.
9. After eating these grilled street foods, it's nice to have some form of dessert. What is this local frosty which is popular during hot season?

Iskrambol is a mixture of shaved ice, diced gulaman, sago and condensed milk. A more popular version which contains more ingredients is called "halo-halo" which means "mixed".
10. Another famous dessert usually with the same ingredients as that of iskrambol but the difference is the sweetened maize, what is its name? 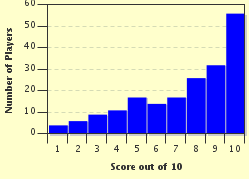 
Other Destinations
Explore Other Quizzes by euab