Revenge is a Dish Trivia Quiz

Sure, you could serve your revenge cold, but why be picky? Hot? Cold? Sauteed? Baked? Who cares? Serve your dishes...with a vengeance!

Quiz Answer Key and Fun Facts
1. Sushi is typically a dish served cold. If you really wanted to exact revenge on somebody by heating up their sushi, you may consider what spicy Japanese condiment normally made with horseradish and mustard?

Wasabi is actually a root which, when ground into a paste, creates a relatively spicy taste. Being in the same family as horseradish, it only makes sense that the substitute wasabi, the type you're apt to find in stores or in less authentic restaurants, is made with horseradish and mustard and the coloured green in production.
The regular type of wasabi is actually a root, like ginger, and it usually only grows in Japan. This makes it difficult to get authentically in other parts of the world. It's considered a spice, not an herb.

But sushi! Grrrrr! Doesn't it just make you think of revenge?
2. What about a dish served hot, you ask? What about a paella? This Spanish dish can be cooked with seafood or with certain vegetables, but leaving out this key spice known for its red threads would probably ruin the dish for purists. What spice seems to be important to the paella?

The paella is Spain's national dish so, if you're really angry with a Spanish diner, you may consider leaving out saffron, a key ingredient known for being one of the most expensive spices out there. This bittersweet herb is a standard ingredient along with rice and olive oil though many different ingredients go together in a paellera, a round pan made to prevent the dish from burning, to give it a different taste.
There are many variations of the paella, one of the most famous being seafood. This normally includes shellfish or mussels. The dish is comparable to an Italian risotto due to the fact that both are rice dishes pan-cooked in broth; you're more likely to have a spicier paella, however, since the spice and oil combination varies.

To get your enemies fuming, however, you may consider undercooking the dish or leaving out a key ingredient...that'll show them!
3. Hey, if you can't compromise on your dish, then kill 'em with sweetness! This delicious pie is made with a particular Floridian fruit, but which would it be?

The key lime pie is a popular one and is made with the extremely tart key lime grown in the Florida Keys. This thin-skinned citrus fruit is juiced and mixed with condensed milk to expand and create the pie filling; a meringue topping is whipped egg white, so the pie is quite light and distinct in flavour. This is similar to the lemon meringue pie which, instead of lime juice, uses lemon zest. Both pies are different in their creation however; the key lime pie does not need to be baked-- the acid in the limes begins that process; the lemon meringue pie is baked.

Tell your antagonizing other it's a sweet pie and watch as they cringe at the sourness! Bwa ha ha!
4. See, pizza is the best dish for revenge-- you can customize it to meet any disliking. If you wanted to ruin your enemy's Hawaiian pizza, what ingredient should you leave off?

There is an endless number of combinations of pizza toppings out there, but the Hawaiian is a pretty conventional one -- it contains cheese and tomato sauce, ham, and pineapple. Leaving off the pineapple would be pretty crucial -- it just happens to be one of the characteristic fruits added to the dish.
Other famous pizzas are the pepperoni pizza (with cheese, tomato sauce, and pepperoni) and the Margherita, a simple pizza with herbs, olive oil, mozzarella, and tomatoes. Pizza is, of course, famous for being an Italian dish, but regional variations can be found in many countries. Sushi pizza, for example, is from Japan.

And hey, if you can't bear to ruin the toppings of your pizza, you could always burn the crust-- that'll show 'em!
5. Although this salad seems like it would be from Italy, it was actually originally from Mexico. Cause for vengeance? Your call. In fact, you could probably increase or reduce the amount of croutons to enable your revenge. What type of salad, known for its unique dressing, is depicted?

The Caesar salad was created in the 1920s in Mexico but has since spread around the world becoming a relative staple; many famous restaurants will feature this on their menu and serve it table-side. The Caesar consists of romaine lettuce and croutons while Caesar salad dressing contains olive oil, Parmesan, garlic, lemon juice, and Worcestershire sauce -- made with several ingredients including vinegar and anchovies amongst other things.
The Cobb salad originated in Hollywood while the Waldorf salad was originally served at the Waldorf Hotel in New York. The Niçoise, containing tuna and anchovies, has French origins.

See, with a tableside-served salad, it's a bit harder to sabotage the dish without their knowing. If subtlety isn't your strong suit, this might not be the best option.
6. Pasta is easy to cook; it's also easy to ruin. For your enemies, you could undercook or overcook an alfredo dish like the one depicted. What long noodle, as shown, is typically associated with alfredo?

Almost like spaghetti in the sense that it's created in long strings, fettuccine pasta is also thick like a strand of ribbon. Like most traditional Italian pastas, fettuccine is made with wheat-based flour and egg, then pressed. Alfredo is a sauce made with cheese, butter, and egg-- unlike tomato sauce, it's meant to be richer and creamier and rarely gets served with red meat. Fettuccine alfredo is the go-to alfredo dish.

BUT should you decide to ruin it for someone, I'd recommend using the wrong sauce...or tweaking the pasta. GRRRRR.
7. This, one of the five mother sauces, is the only one that is also an emulsion-- it's made of ingredients that don't go together. You could technically enact revenge by giving them a completely different sauce, of course, or by adding too many acidic ingredients. What sauce is this?

Hollandaise is made with egg and butter, but then blended with vinegar or lemon juice to give it a light zip. While these would normally be an unlikely combination, they make a rich, smooth result. As is the case with the other mother sauces, Hollandaise can be the base for more complicated sauces including Béarnaise and Vin Blanc.
Béchamel and Velouté are both white sauces thickened with roux but while the former is made with milk, the latter is made with light stock. Espagnole is dark and made with veal stock. The fifth mother sauce is Tomato.

Want to enact revenge? Why not add in more lemon or vinegar and get the sauce to separate? That'd be a shame.
8. The Croque Monsieur is a grilled sandwich covered in sauce. My suggestion for your sabotage-- cut off the crusts or fill it with spam! The word Monsieur means 'Mister' in French, but what does 'Croque' translate to in the name of this dish?

The crunch probably has something do do with the bread-- grilling the dish gives it an interesting texture. Made with ham and cheese, the sandwich is often covered with Béchamel sauce. Another variation of the dish, the Croque Madame, involves placing an egg on top (cooked, though I guess you could leave it uncooked if you wanted to ruin someone's meal). Welsh Rarebit is very similar but it's covered in a thick, spicier sauce. Likewise, the Monte Cristo is a grilled ham and cheese sandwich but instead of being served in a sauce, it's battered and fried.

I won't tell anyone that you burnt the bottom of the sandwich if you won't!
9. It'd be hard to sabotage this big soup of Italian origins -- maybe oversalting? -- because it can contain so many different vegetables and small pasta. Which of these soups is depicted?

Minestrone has a light broth unlike borscht, a thick stew, and can contain any array of vegetables including potatoes, peas, corn, beans, and others. Minestrone almost always contains either rice or small pasta as well. While jambalaya is another mixing pot, its origins are in Louisiana and it often contains seafood; Wonton soup is from China.
Minestrone may be one of the most popular soups from Italy. It sells all over the world and is a staple on restaurant menus.

But hey, like pizza, soup is a dish suited to revenge. One wrong ingredient could mean food poisoning should that be your aim.
10. Sannakji is a Korean dish which, if you're not familiar with Asian cuisine, could be a bit of a challenge. You may not even need to make changes to the dish if your enemy is squeamish. What is the main ingredient of this meal?

How often do you get a dish that can crawl right off the plate? Sannakji is made by cleaning live baby octopuses, chopping them into pieces, and arranging them in a temporary fashion on the plate. These can be served as is or with a garnish-- usually sesame seeds.
This may be a hazardous meal. Because the parts are still alive and moving, Sannakji is able to suction onto teeth, the mouth, and the throat, causing a potential choking hazard if not eaten with care. This is not a meal for the finicky.

You know what? I won't even give you a way to ruin this dish. It is neither in my wheelhouse nor a consideration for dinner.
Source: Author kyleisalive 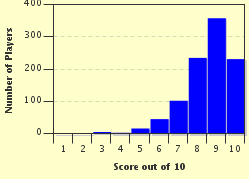