American Slang - How 'American' Are You? Quiz

Many of us learn English in high school, which gets replaced by the American English we hear on television and in songs. But just how good are you at the real American slang? Warning though, some of it might be a bit outdated!

Quiz Answer Key and Fun Facts
1. In the 19th century I was addicted to the 'big-M', what was my vice?

The phrase dates back to the days of the Civil War, and fits within the tradition of not really naming but just indicating problems.
2. If I am 'parboiled', what am I?

Also used is the term 'boiled' or 'toasted'. Perhaps this is because alcohol can give you this warm feeling inside?
3. When something is 'gubbish' what is it exactly?

Gubbish is a combination of garbage and rubbish, which explains a lot. It's a computer generation type of slang, where in email words get abbreviated a lot. The word was used in the early eighties and seems to have gradually disappeared.
4. He's a 'gunner', so he's what?

Like many slang words this one has a military origin. It refers to someone who diligently does his/her paperwork and likes to do things by the books. 'Gunny' is used as well.
5. The guy is 'AWOL', so he's what?

Stems from the military phrase 'Absent Without Leave'.
6. My crystal ball, all in 'smithereens' means what?


Answer: in many tiny pieces

'Out to lunch' describes someone who is preoccupied, and not paying full attention to what is happening around them. It may also lead to forgetfulness.
8. I got rid of that gas-guzzler, so what is it that I got rid of?


Answer: a large automobile that uses much gasoline

Very American those gas-guzzlers, huge limos... but they seem to be going out of style.
9. When you are on somebody's six you are where?


Answer: on his butt

Okay... if you don't know where it stems from, imagine the shape of the number 6. This expression too seems to be popular in the military, more specifically the Air Force.

It may also refer to the numbers on a clock. Imagine facing the 12 - someone "on your six" would be right behind you. Since pilots do use the clockface for directions, this seems logical.
10. When someone is a straight shooter, he is what?

Just like a straight arrow, someone who doesn't stray.
Source: Author Jaye 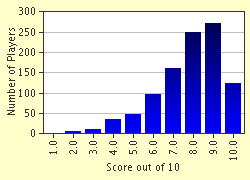 
Other Destinations
Explore Other Quizzes by Jaye