Quiz Answer Key and Fun Facts
1. The old fellow crawling along ahead of you thinks his old Nash Rambler is pretty snazzy. You think he is an old fuddy duddy. How would you characterize a "fuddy-duddy"?

The origin of "fuddy-duddy" has not been confidently established. It first appears in published writings in the early 20th century. I remember it as the phrase my father used to describe the old, slow drivers ahead of him on the long hill up to our house.
2. You can't "keep your shirt on" and have a "hollow leg". What is your problem?


Answer: Impatience and a voracious appetite for food or drink

I was often told, "keep your shirt on" and informed that I "must have a hollow leg" as I grew up. I am unable to determine the origin of the expression "hollow leg". I do know that the hollow space can be filled with either alcoholic beverages or with food. Please inform me if you know the origin.
3. An old fogey exclaims, "Hotdog!" What could she or he mean?


Answer: Either "Wow" or "What a show off" depending on context


Answer: Confused, but just a smidgeon

"Discombobulate" is thought to have derived from "decompose". Young fogeys often mistakenly pronounce the word "discomBOOBulate". Old fogeys never make that error. Titch may have originally been a term for a small child. "Smidgeon", like titch, refers to a very small amount.
5. If the old fuddy-duddy says something is "piddly", what is it?

If something is "piddly", it is small; but it is also likely to be trifling. Apparently "piffling", British slang term, is equivalent to "piddling".
6. My folks always warned me not to "dilly-dally", but sometimes I did. Which of the following was the most likely consequence of my dilly-dallying?

"Folks" is fogey-speak for parents. "Dilly" may have derived from "delightful". I still find dallying delightful.

"What love? Time to go? All right. I'll come as soon as I finish this quiz question."
7. I was frequently told not to be any of the following (usually at times when I was undeniably being one). But which of these words has a meaning least like the other three?

"Doof" is Scots for "fool". "Nit" is apparently from the Middle High German "niht" meaning "nothing"; "brainless" is therefore a near synonym for "nitwit". "Numbskull" speaks for itself.
8. There was a word we used to employ to mean that a person was out of date and not cool. Now I suspect that using that word in that fashion means you're out of date and not cool. The word is also a shape. To which word am I referring?

I remember that when I recited that Cub Scout's pledge I promised, "to be square and obey the law of the pack". Little did I know that I was uttering prophecy!
9. If a fogey's situation is "dicey", which of the following best describes the fogey's circumstances?

"Dicey" derives from "dice". It refers to perilous situations and expects a poor outcome.
10. Things are "hunky dory". Which of the following is most likely to be a description of your mood?

"Hunky dory" has been in use since at least the 1860's. It may have originally referred to being on "home base" while playing childhood games. If very many of these words are in your everyday vocabulary, you may want to consider joining FunTrivia's "Fogeys" group.
Source: Author uglybird 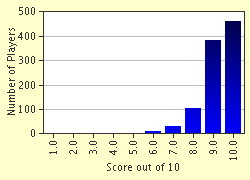