Yo! Whassup? Chill out when taking this quiz. This quiz has some Hip-Hop (Rap) related slang. If you don't do good, don't start bugg'n. Take your time, it's all good. Peace out!

Quiz Answer Key and Fun Facts
1. When saying "that's da bomb", what you are saying?


Answer: Something is great

Hip-Hop (Rap) artist Kris Kross released a CD in 1993, using the slang word "Da Bomb" as its title.
2. If you said, "That guy has a lot of dead Presidents", you are saying?


Answer: The guy has a lot of money

Using the slang term "dead President" is in reference to pictures of George Washington or Abraham Lincoln on United States paper or coin currency.
3. If you hear someone say, "They are going to bounce", they are saying?


Answer: They are gonna leave

Bon Jovi released a CD titled "Bounce", in 2002. The songs are a journal kept by the band of their journeys on the road going from city to city.
4. If you hear someone say, "They ganked these sneakers at the mall", they are saying?


Answer: They stole them


Answer: That they are better than you

In the 2004 American League playoffs between the New York Yankees and the Boston Red Sox, pitcher Pedro Martinez of the Red Sox directed the phrase to the New York Yankees "Who's your daddy?" to belittle them. Boston went on to win the Playoffs and the World Series. '90s slang is still being used today.
6. If someone says, "That movie was really fly", they are saying it was?


Answer: It was good

The meaning and description of the slang word fly is in the urban dictionary. Their definition of the word is awesome, good or cool.
7. If you say, "Someone has nice bling bling", you are saying?


Answer: They have showy jewelry

The phrase "bling bling" was coined by New Orleans rap family Cash Money Millionaires back in the late '90s. It gained national awareness with a song titled "Bling Bling" by Cash Money artist BG (Baby Gangsta). It was added to the Oxford English Dictionary in 2003.
8. If someone says to you, "Whatever!", they are saying?

The phrase was first used by Alicia Silverstone in the 1995 movie "Clueless".
9. If you say, "That guy acts postal", you are saying?

This phrase refers to a trend of some postal workers going crazy and becoming violent.
10. If you hear someone say, "That something is phat", they are saying?


Answer: It is cool 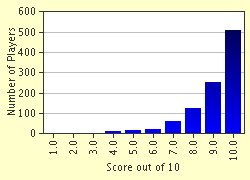 
Other Destinations
Explore Other Quizzes by brooklynmike