Do you speak Texan? Trivia Quiz

It took me years to get fluent in Texan, the idioms of my adopted state. The following are archived by Rice University, Houston, Texas. I'll give you the expression, you decide the meaning.

Quiz Answer Key and Fun Facts
1. If a Texan describes something or someone as "catty whompus", he means it is which of the following?


Answer: something that doesn't fit properly or is out of line

"Joe hitched up the wagon all catty whompus." This is akin to something being whomperjawed - not a good thing!

There is no established origin for this particular expression.
2. When a Texan says she is "fixin' to", what does it mean she is doing?


Answer: getting ready to do something

Come on, this is an easy one! You only have to know a couple of Texans casually to hear this ubiquitous expression! I was surprised to hear it used even in a formal setting, as when the judge said to the attorney "I am fixin' to hold you in contempt!"
3. The Texan expression "lit out" means which of the following in English?


Answer: took off, started out

This one has the connotation of leaving or taking off in a big hurry, as in "He lit out from there like the dogs was after him."
4. If a Texan is talking about a "Norther", he is referring to which of the following?


Answer: a storm or cold front that comes down from the north

As they say in Texas, the Lone Star State doesn't have climate, it has weather! When a norther blows in, usually in late fall or winter, the temperature can drop as much as 50 degrees in a 24-hour period. The worst of the northers are called blue northers.
5. When a Texan says "Nu-uh", what is she saying in English?

The opposite of "uh-huh" is "nu-uh." See how easy Texan is?
6. If a Texan describes someone as "ridin' high", how is she describing him in regular English?


Answer: doing well or all right

If he's "ridin' high", he's "doin' aw'right". This is probably an old reference to the kind of horse you are riding. If you are poor, you're probably riding a short burro or plug. If you're doing well or all right, you are probably riding a taller thoroughbred or even a Tennessee Walker, thus you are riding high!
7. When a Texan describes someone or something as "rode hard and put up wet", he is saying that person or object is what?


Answer: someone who looks the worse for wear

Someone who looks like he was "rode hard and put up wet" looks plumb tuckered out and the worse for wear. This refers to the unfortunate practice of riding a horse a long way and then putting it up still wet from sweat/weather without properly taking care of it. Thus, it usually refers to someone who has not taken good care of himself and reflects some "hard miles on him".
8. If you hear a Texan say "Ah'mo", you can translate it to mean which of the following?


Answer: I am going to

What a time saver! Two syllables for the price of five. There is a high school in Texas with the motto of "Ahmo" which stands for "Ah'mo kick your butt." Of course, this only refers to their sports and other competitive programs! Strange, but true!
9. If you hear a Texan referring to "Chester drawers", you can safely conclude she is talking about which of the following?


Answer: that piece of furniture you keep your socks in

Somehow, a chest of drawers has become a "chester drawers". It is preferred Texan-English to the French "bureau".
10. A Texan who uses the word "tump" means which of the following in English?


Answer: to spill or dump

To "tump" something is to spill it or dump it, as in "Little Billy Bob is about to tump his milk again!"
Source: Author marshame 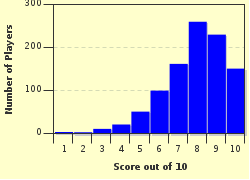 
Other Destinations
Explore Other Quizzes by marshame