More American slang and sayings to pass along. Hope you enjoy them.

Quiz Answer Key and Fun Facts
1. You're on a date with your one and only, it's a beautiful evening, the wine was heady and you suddenly "pop the question". What have you done?

Yes, you've gone and done it! "Pop the question" has been in English use since 1725, but in specific reference to proposing marriage, it can be traced to 1825.
2. You take her home, and on the way she says "yes". You're 'walking on air', so to speak, when a friend stops you. "What's up?", he asks, and proceeds to compare your grin to what?

This phrase has been in use for many years and is specifically rural southern in origin. It would be most likely said to you in a friendly, playful manner by a buddy or relative.
3. Your financial status being what it is, you hesitate to set a date for your wedding. You have a small amount in your account, as you've been saving for what unspecified purpose?

There is no information on the origin of this phrase that I can find, although it's a very common American phrase and widely used. The "rainy day" referred to can mean a host of things, usually involving an unexpected expense.
4. You'd like to share the news of your impending nuptials with your sister, but she's at a "hen party". Where is she?


Answer: at a gathering of female friends and acquaintances

"Hen party" was originally used in reference to a group of bachelorettes gathering to celebrate with a friend who is about to be married. It is widely used in the U.K. and Australia as such, but has come to mean any gathering exclusively for women, especially in the U.S.
5. Your friends arrange to throw a party for you; a bachelor party, but it's going to be a "roast". What is going to happen?


Answer: you're in for an evening of toasts and good natured insults

"Roasts" are a fairly common way of throwing a bash, especially among men. It's patterned after the Hollywood Friars Club's get togethers in which a celebrity was made the object of insults, barbs and ridicule, often in a crude, obscene manner. For a long time, Dean Martin hosted the same type of affair on television, greatly cleaned up and sanitized, which were extremely funny.
6. You decide to (perhaps) add to your fortunes by gambling. The chosen method includes "galloping dominoes". What are they?

the phrase "galloping dominoes" is usually used in connection with the game of Craps. It borrows the name from the game of dominoes, which has been around since 1800 and uses blocks containing various numbers of pips. Craps is played with a pair of dice, trying to roll certain numbers or combinations of numbers and betting of the outcome of the throw.
7. While you are playing the game of craps, another player remarks that you are "green as grass". What is he implying?


Answer: that you are new at the game and not very good

There is little to no information as to the origin of this phrase. The term "green" to denote inexperience been in use since at least a couple of centuries, and, as are many of the phrases used here, probably not exclusively American.
8. You win $250.00. You rush to your sweetheart's side to give her the good news. You can get married soon. But wait, she's angry and calls off the engagement. She didn't realize you were a "high roller". What's that?


Answer: a gambler or speculator with a lot of money

A high roller is someone who risks large amounts of money. The term roller would indicate origins in a game that used dice.
9. No amount of begging or pleading will induce your paramour to make up with you. Her father is getting tired of your intrusions and comes after you, blustering and threatening to "punch your lights out". But you're too "light footed" for him. What does it mean to say that you are "light footed"?


Answer: you're too fast, too agile for him to catch you

This comes from 16th century England, meaning nimble and quick, especially in evading authority.
10. Well, you finally accept that the romance with her is over. But you will always remember her fondly and as being "pretty as what fruit"?

"Pretty as a peach" comes from the mid 19th century America. There is also the phrase "prettier than a speckled pup under a red wagon".
Source: Author Pick61 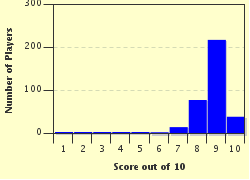