Holy cow! My last fogey quiz was duck soup! Here's another opportunity to prove your "fogacity".

Quiz Answer Key and Fun Facts
1. If someone thinks you ought to skedaddle, what is it they want you to do?

"Skedaddle" seems to have come into use around the time of the civil war. Some believe that the Roaring Twenties expression "23 skidoo" derived from "skedaddle". (The derivation of the "23" portion seems not to be well worked out.)
2. The old codger thinks things are in fine fettle. Which of the following is words/phrases is nearest in meaning to "fine fettle"?

"Fettle" means to be in an appropriate or proper state (adding the fine could be considered to be redundant). "Fettle" is also a metallurgic term for lining a hearth with sand. "Copasetic" or "copacetic" has a meaning very similar to the first meaning given for "fettle".

The derivation of "copasetic" is not known with certainty. One theory maintains that it originally stood for "The cop is on the settee" and had a meaning equivalent to "the coast is clear".
3. Footloose and fancy free, George will soon be tripping the light fantastic. In which of the following activities will George most likely be engaged?

To be "footloose and fancy free" usually implies that a person is unmarried and free of romantic entanglements. "Fancy" is being used in the sense of "fancying" someone. Our unmarried fogey friend is going, as a single, to a dance.
4. My dad told me he that he didn't want me lollygagging around till the cows came home. With which of the following phrases could Dad have made his point more succinctly?


Answer: Get off the dime!

Although the origin of the phrase "get off the dime" seems not to be known definitively, I encountered one entirely plausible explanation. When couples in dancehalls stood tightly embracing one another and not moving, the dancehall attendants would instruct them to "get off the dime". 'Lollygagging until the cows come home" means remaining idle for a long time - so long that the cows are ready to be milked again.
5. You've put the kibosh on something. Have you put the icing on the cake or pulled the rug out from under something?

I was astonished to find that "kibosh" is not of Yiddish origin. "Bosh" means nonsense or foolishness. Charles Dickens is credited with being the first to get "kibosh" into print, although he spelled it "kye-bosk" (according to "wordorigins.org").
6. A fogey falls and lands on his er...rear end. To which part of the fogey anatomy do I refer?

Fogeys are usually masters in the use of ameliorative euphemisms, especially when describing certain anatomical locations. A "keister" is properly a suitcase. However, we all know what portion of one's anatomy rests on a suitcase when one sits on it.
7. "I don't see any reason for you to get all gussied up," my mom informed me. From what was my mom trying to spare me?


Answer: Getting dressed up

According to "Word-detective.com", a "gusset" was a triangular piece of cloth that was sewn into clothing to improve the fit. It is postulated that "to be all gussied up" derived from overdoing it with the gussets.
8. When I was a young child growing up in the U.S., I heard my parents refer to "unmentionables". I finally found out what they were. Which of the following are "unmentionables"?

According to "etymonline.com", "unmentionables", commonly used to refer to undergarments, once referred to trousers. "Skivvies" originally referred to sailor's underwear.
9. Fogeys are a careful and suspicious bunch. Which of the following is most likely to snooker them?

"Codswallop", "hogwash" and "tommyrot" are all complete nonsense and should not deceive anyone. Definitions of "malarkey", on the other hand, reference lies and exaggeration; and one source (Dictionary.com) indicates that "malarkey" may have deceptive intent.
10. The old skinflint is up to his usual shenanigans. Which of the following is most nearly a translation of the preceding sentence into plain English?


Answer: The elderly miser is involved in his accustomed mischief.

The origin of the word "shenanigans" is uncertain. The word's Irish flavor has led to speculation about an Irish origin. Some believe it began to be used on the gold fields during the California gold rush. The term "skinflint" derives from the time when flints were used to start fires.

A "skinflint" was one so penurious that he would shave (skin) a flint so as to save money by using the smallest possible piece to kindle a fire.
Source: Author uglybird 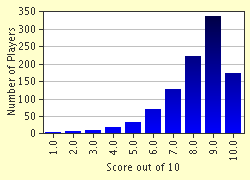