Please stop me before I create more of these quizzes.....

Quiz Answer Key and Fun Facts
1. If I advised my Uncle Thurlo to "make hay while the sun shines", what would I be advising?


Answer: make the most of his opportunities while he has the chance

This is very old advice, traceable to John Heywood's "Proverbes in the Englishe Tongue" (1546) in which he writes, "when the sun shineth, make hay, which is to say, take time when time cometh, lest time steale away." Still sage advice, isn't it?
2. Uncle Thurlo was an amateur boxer in his youth and has many times described his famous and deadly "haymaker". What is he talking about?

"Haymaker" is specifically American and comes from ca. 1912. It is perhaps an elaboration of the 1887 phrase "hit the hay", or go to sleep.
3. Uncle Thurlo describes a former girlfriend as a "real doll". What is he trying to convey about her?


Answer: that she is very pretty

"Doll" has been in use since the early 16th century, as an endearing term for a pet or mistress; later as a nickname for 'Dorothy' and as a term meaning a child's toy. In the late 18th century it came be used as describing a pretty, silly woman. It is still used in the U.S., but I would suspect mostly by older, more mature adults. "Real Doll", when you think about it, is an oxymoron.
4. Uncle Thurlo has a job which is sometimes not very difficult. At those times, he describes his work as "riding the gravy train". What does that mean?


Answer: it is an opportunity in which money is easily accumulated

"Gravy" came into use in the U.S. about 1910, and simply means "easy money." "Gravy Train" was a railroad term for short, easy haul that paid very well.
5. Uncle Thurlo sometimes talks about his time in the Army and I once heard him use the term "scuttlebutt". What is the definition of "scuttlebutt"?

"Scuttlebutt" is a nautical term from the early 19th century, a time of iron men and wooden ships. "Scuttle" described an opening in the ship's deck, and "butt" was a barrel or cask specifically for water. It was the sailors' custom to gather around to take a drink of water and to exchange gossip while doing so.

In much the same way, present day gossip is traded at many an office water cooler.
6. Uncles Thurlo's oldest son, Wendell, when faced with making a decision of any kind, will often use the phrase, "That's a no brainer". What is he saying?


Answer: the answer is easy and requires little or no thought

"No brainer" is an American expression from the 1950s. It simply means little or no mental effort is required.
7. Aunt Martha has been heard to tell Uncle Thurlo, "Hold your horses!" more than a few times. What is she trying to get him to do?


Answer: wait a minute, be patient

This expression first appeared in the New Orleans Picayune Times in 1844 as "hold your hosses", which marks it as being distinctly American. It is possibly military in origin, likely in reference to the artillery branch of the army. The more familiar "hold your horses" doesn't make its appearance until the early 20th century.
8. Uncle Thurlo, like everyone else, has occasionally gone on a "wild goose chase". This one is fairly common to English speakers. What does it mean?

This phrase appears in Shakespeare's "Romeo and Juliet" in 1592. Mercurio (to Romeo): "Nay, if thy wits run the wild goose chase, I have done, for thou hast more of the wild goose in one of thy wits than, I am sure, I have in my whole five".
9. When asked how she feels, Aunt Martha is liable to say "Oh, fine as frog hair." Is she feeling good, bad or indifferent?

"Fine as frog's hair" is a simile that's been in use in the U.S. since the mid 19th century. From C. Davis' diary of 1865, "I have a better flow of spirits this morning, and, in fact, feel as fine as frog's hair, as Potso used to say". "Fine as wine" is another term you might hear.
10. "Don't put all your eggs in one basket" is a phrase that's been around for a long time. Uncle Thurlo often argued AGAINST the wisdom of this advice, as did Mark Twain. What was the logic behind their argument?


Answer: put everything in one basket and you only have to watch one basket

Regardless of the wisdom, the phrase has been around since the mid 1600s. In Don Quixote, Cervantes wrote, "Tis the part of the wise man to keep himself today for tomorrow and not venture all his eggs in one basket."
Source: Author Pick61 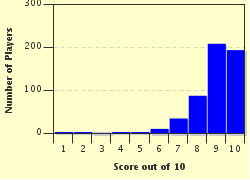