Once again I present a quiz which gives a hint of the meaning of some slang words and phrases and acquaints you with some of my slightly disfunctional but lovable family.

Quiz Answer Key and Fun Facts
1. My Aunt Martha owns a dog which she says is a mutt. What does she mean?


Answer: the dog is of indeterminate ancestry

A cross breed is one which the ancestry is known and has been produced by cross breeding. Some dog owners are of the opinion that mixed breeds and mutts are, in general, healthier, smarter and longer-lived than purebred dogs.
2. My brother Earl went to a swimming party recently and performed a cannonball. What did he do?

A cannonball is accomplished by wrapping the arms around the knees and holding them to the chest. It creates a large splash and can be very annoying.
3. If I described my friend as being tighter than two coats of paint, what would I be implying?

This condition can also be described as clinging to the first nickel one ever earned.
4. My cousin Bernie is a motor mouth. What does that mean?


Answer: he talks too much

Everyone knows at least one motor mouth. One who was vaccinated with a phonograph needle. Never shuts up. Ad infinitum.
5. I had an uncle who was compared to a dog's hind leg. What were they saying about him?

In full, he is as crooked as a dog's hind leg. In other words, don't trust him, especially in a business deal.
6. If someone invited you to a necktie party and told you that you were the guest of honor, what would you best do?

Necktie party was a euphemism for a hanging. It's an old west designation. The guest of honor will be wearing the rope around his neck.
7. Cousin Leo was a great stump speaker in his day. Where did stump speaker come from?


Answer: in times past, orators would stand on a stump if no stage was available

Especially in the vast rural areas of early America, candidates for election would visit small villages with no facilities for speechifying. Standing on an available stump was a way to be better seen and heard. The word stumping is still in use, but is slowly disappearing from the language.
8. Sister Sophie was often described as being ham handed. What were they saying about her?


Answer: she was heavy handed and somewhat clumsy

Ham handed is pretty much as it sounds - someone with no daintiness about them.
9. Brother Al was quite an athlete. He would become irritated if he threw a gutter ball. What's a gutter ball?


Answer: a rolled bowling ball which falls from the alley into the gutter

A gutter ball results in no pins being knocked down. It can ruin a good night at the old alleys.
10. My ancestor Phineas was with Lewis and Clark. His job was to get the lay of the land. What was he doing?


Answer: scouting ahead to study the terrain

His job would have been simply looking for potential problems from a geographic standpoint.
Source: Author Pick61 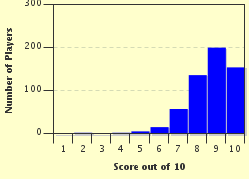