Since my first quiz, "Vintage American Slang" appeared, there has been a hue and cry for more. Well, a little hue and not much cry, really. But for what it's worth, here it is. Enjoy!

Quiz Answer Key and Fun Facts
1. If I tell you that the Browns will win on Sunday, and that it's a "lead pipe cinch", what have I conveyed to you?


Answer: That the outcome is certain

Cinch comes from the Spanish "cincha" or saddle girth. If it is "cinched tight", it's a sure thing that the saddle will stay in place and that you won't fall off - a certainty, in other words. Where "lead pipe" comes in is not so clear. Perhaps it is just used as an intensifier or comes from a time when the carrying of a piece of lead pipe as a weapon was one way to assure one's own safety.
2. If a task is described as "easy as pie", it is a simple, uncomplicated one. But, one might ask, why "pie"? Making a pie isn't that simple. I know, I tried it once. So, how is pie simple and easy?


Answer: It's not the making, but the eating - a simple, easy task.

"Easy as pie" and "nice as pie" have always connoted a simple, pleasant, easy experience. Mark Twain used the phrase "polite as pie" in "Huckleberry Finn" in 1884. Then there's "pie in the sky", a dreamy, wishful and pleasant way of describing the probably unattainable. An easy task can also be described as "a piece of cake".
3. If I said "I'd love to travel to England, but it costs an arm and a leg", what am I implying?


Answer: For me, it's very expensive.

There is conjecture that the term, which came into use in the late 1940s, refers to the cost paid by some wounded veterans who really did pay an arm and a leg. Other sources cite the Civil War as the source. There is also the theory that artists used to charge various fees for a portrait.

A head and shoulders was one amount; if the painting was to include arms and hands, it was more. Most expensive was the fee to include legs and feet in the picture, but that would make the use of the expression much earlier than the 1940s.
4. At least once in your life, you've "flown off the handle". What did you do?


Answer: Erupted into a sudden burst of unreasonable anger

This is fairly straight forward. The expression came into use in the mid 1800s, probably on the frontier. An ax head flying off its handle could create havoc. Ax heads were mostly forged in the industrial east. The western user often had to whittle or carve a handle himself, which could result in a poor, loose fit.
5. Now and then, something occurs that will "get my dander up". What does the phrase mean?


Answer: It angers or irritates me.

The term "dander" signifies the airborne material which clings to the natural oils on animal fur. It is related to "dandruff". Fear or anger makes the hackles on an animal or the hair on the back of the neck on a human stand up.
6. When something or someone "goes haywire", what is happening?

Thin strands of "haywire" were used at one time to wrap bales of hay. It came in tightly wound coils which, when unleashed, were apt to become a tangled, jumbled ball.
7. My Aunt Martha bought some new furniture which she describes as "run of the mill". What does she mean by this?


Answer: It is ordinary, unadorned and plain.

One of the first instances of this term being used comes from an advertisement in the 1890s, when a clothier describes his latest shipment as "seconds and run of the mill at half the price of top of the line items." The cloth was apparently the mill's run and not inspected for quality.
8. Here's a fairly recent addition to the language. If I describe a movie as a "chick flick", what am I implying?


Answer: That it's a film that appeals especially to women.

This term was first used in a review of the movie "Thelma and Louise" in 1995, which was one of the first violent, action movies to feature women as principal characters. Great movie, but I hated the ending.
9. I was involved in a game of golf and, on the seventh hole, another player said, "The game is in the bag". What was he telling us?


Answer: That he was certain to win.

Any event that is certain to end with a positive result is described as "in the bag". The term comes from early 20th century baseball. In the late innings, when a win was assured, a member of the sure-to-be victorious team would take the bag in which the extra baseballs were kept, cinch the draw string tight and take it from the field into the clubhouse, because it was no longer needed and the game "was in the bag".
10. What does it mean if you "spill the beans"?

This term came about in the early 20th century, and was first mentioned in newspaper articles about politics. A congressman's aide was called before a committee and "spilled the beans" about a pet project. "To spill" can be used in reference to about anything, but is used mostly in reference to information.
Source: Author Pick61 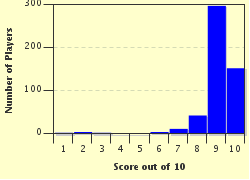