Here are some old-fashioned expressions you might have heard or read or learned somewhere. They're mostly from the US, but there was so much mixing that they may be familiar in England too.

Quiz Answer Key and Fun Facts
1. If you have "a hard row to hoe," what does it mean?


Answer: you have a difficult time

Amid some sermons published in 1852 was the explanation:"This expression is in reference to the hoeing of sugar or corn. Sometimes one row is harder than another, and one poor fellow lags behind the rest because he has got a harder row to hoe." "Bartlett's Dictionary of Americanisms," 1859, explained: "To have a long (or hard) row to hoe, is a common figurative expression, meaning that one has a long or difficult task to perform.

The allusion is to hoeing corn or potatoes." Whatever one was hoeing, the metaphor was clear.

I can't remember where I first learned this, but it's just so perfect I've begun using it in everyday life. William and Ellen Craft, in "Running a Thousand Miles for Freedom," writing about their escape from slavery in 1860, said "big bug" was "a gentleman of distinction." The 1859 "Dictionary of Americanisms" defines big bugs as "people of consequence," and gives an unusual female example: "Miss Samson Savage is one of the big bugs -- that is, she's got more money than a'most anybody else in town." It also mentions "big dog" as an alternate phrase meaning "the principal man of a place or in an undertaking," and it could also be "the big dog with a brass collar" because little dogs didn't warrant collars.
3. What does it mean to say "he's a goner"?


Answer: he is past recovery

Going across lots meant going straight there, across fields and woodlots if necessary, rather than by following the road. According to the 1859 "Dictionary of Americanisms," it means "by short cuts, in the quickest manner." Brigham Young said in an 1857 speech, "I swore... that I would send [my enemies] to hell across lots if they meddled with me." Henry David Thoreau used it ironically in his essay "Walking," 1862, implying he was taking the more contemplative way by not using the busy roads: "Some do not walk at all; others walk in the highways; a few walk across lots. Roads are made for horses and men of business. I do not travel in them much..."
5. If someone was in a fix, what condition were they in?


Answer: in trouble, a bad way

Bartlett's 1859 "Dictionary of Americanisms" said that a fix was "A condition; predicament; dilemma" and gave the example, "Some feller jest come and tuck my bundle and the jug of spirits, and left me in this here fix." It was apparently not just American, as John Ogilvie's dictionary of scientific, vulgar, and other English words was published in the British Isles in 1855, and it included "To be in a fix. To be in a difficulty or dilemmma [vulgar]."
6. If I talk about my "dog goned neighbor," what might you guess?


Answer: I was frustrated with him

Dog gone was a euphemism for swearing. Notes in Mayne Reid's "The Quadroon," 1856, explained, "'Dog gone,' and 'darn,' are in Western [Louisiana] phraseology common expressions. They are supposed to be a delicate substitute for the more English 'damn.'" Bartlett's 1859 "Dictionary of Americanisms" illustrated it spelled several ways with different examples, but with a consistent meaning: "Dog Gauned. An anagrammatic form of swearing. Southern. 'If there's a dog-goned abolitionist aboard this boat, I should like to see him...' -- Gladstone. Englishman in Kansas, p. 46. 'No, says I, I won't do no sich dog on thing...' -- Southern Sketches, p. 33."
7. If it's been a coon's age since something happened, what has it been?

The Online Etymology Dictionary says "Coon's age is 1843, American English, probably an alteration of British a crow's age." Bartlett's 1859 "Dictionary of Americanisms" says it meant "A long time; as, 'I have not been there in a coon's age.'"
8. If I reported that a speaker went off half cocked, what would I mean?


Answer: he was unprepared

The Online Etymology Dictionary says, "To go off half-cocked in the figurative sense 'speak or act too hastily' (1833) is in allusion to firearms going off prematurely; half-cocked in a literal sense 'with the cock lifted to the first catch, at which position the trigger does not act' is recorded by 1750." Bartlett's 1859 "Dictionary of Americanisms" reports: "'To go off at half cock' is a metaphorical expression borrowed from the language of sportsmen, and is applied to a person who attempts a thing in a hurry without due preparation, and consequently fails. 'Mr. Clayton of Georgia is a fine speaker; he is always ready, and never goes off half cock.' -- Crockett, Tour down East."
9. If I say, "He gave me a bogus fifty dollar bill," what do I mean by bogus?

Bartlett's 1859 "Dictionary of Americanisms" defines it as "Counterfeit, false," and gives the following report of its origin:"The Boston Courier of June 12, 1857, in reporting a case before the Superior Court in that city, gives the following as the origin of this word: 'The word bogus is a corruption of the name of one Borghese, a very corrupt individual, who, twenty years ago or more, did a tremendous business in the way of supplying the great West, and portions of the South-west, with counterfeit bills and bills on fictitious banks.

The Western people fell into the habit of shortening the name of Borghese to that of Bogus; and his bills, as well as all others of like character, were universally styled by them "bogus currency." By an easy and not very unnatural transition, the word is now applied to other fraudulent papers, such as sham mortgages, bills of sale, conveyances, etc.'" The Online Etymology Dictionary dates it to 1838, meaning "'counterfeit money, spurious coin,' American English, apparently from a slang word applied (according to some sources first in Ohio in 1827) to a counterfeiter's apparatus."
10. "He has a lot of gumption. I think he'll do well." What am I saying?


Answer: he has enthusiasm and drive 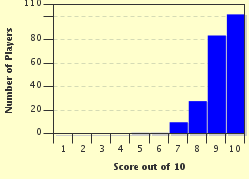