North and South US Slang in 1859 Quiz

These U.S. slang words have something to do with the north or south in 1859, just before the country was going to split apart. Can you see it coming in the language? The words are from John Russell Bartlett's "Dictionary of Americanisms" (Boston: 1859).

Quiz Answer Key and Fun Facts
1. By 1859, this word had taken the place of "master" in such phrases as "master carpenter" in America. Also, "the blacks often employ it in addressing white men in the Northern States." As a verb, it meant "To rule over; to direct." What was it?

The "Dictionary of Americanisms" said that blacks used it in the north "as they do massa (master) in the Southern States." The Online Etymology Dictionary suggested it became popular in America due to "egalitarian avoidance of master." It apparently came from the Dutch language in the 1640s.
2. What did the "peculiar institution" refer to, in 1859?

According to the 1859 "Dictionary of Americanisms," the peculiar institution was "negro slavery, so called as being peculiar to the Southern States." In this case, peculiar doesn't mean strange or odd, but merely unique to. Paranoia in the south was rapidly increasing.

The South Carolina Gazette was quoted as saying, "The dangers which at present threaten the peculiar domestic institutions of the South, make it necessary that all strangers from the North should be examined and their business ascertained."
3. In 1859, what did you call a politician who could be talked into supporting most anything, with a bit of threatening or promising?

The 1859 "Dictionary of Americanisms" gave the definition: "Dough-faces. A contemptuous nickname, applied to the Northern favorers and abettors of negro slavery... Generally it means a pliable politician, -- one who is accessible to personal influences and considerations." It said the insult could be applied the other way too, to "Southern men who are false to the principles of slavery, as Northern dough-faces are to the principles of freedom." John Randolph of Roanoke, Virginia supposedly coined the expression when he said in 1820, "I knew that these [northern Democrats] would give way.

They were scared at their own doughfaces." Randolph "referred to a children's game in which the players daubed their faces with dough and then looked in a mirror and scared themselves," according to Daniel Walker Howe, quoted at the Online Etymology Dictionary.
4. What nationality did the slang term "Cunnuck" refer to, in 1859?

The 1859 "Dictionary of Americanisms" had the listing: "Cunnuck, or K'nuck. A name applied to Canadians by the people in the Northern States." For an example of usage, the dictionary turned to humorist Sam Slick: "Missus didn't affection Yankees much; and Cunnucks she hated like poison, 'cause they enticed off negroes." Wikipedia dates the usage of "Kanuck" to 1835 "originally referring to a Dutch Canadian or French Canadian," and says "The origins of the word are uncertain."
5. What was the main ingredient in johnny cake, hoe cake, and hasty pudding?

It seems every U.S. region had its own version of fried cornmeal cakes or boiled pudding. The 1859 "Dictionary of Americanisms" mentions that hasty pudding is "Indian [corn] meal stirred into boiling water until it becomes a thick batter or pudding, and eaten with milk, butter, and sugar or molasses.

In Pennsylvania and some other States it is called mush; in New York, suppawn." It's mentioned in the song Yankee Doodle as "hasty pudding" and the Online Etymology Dictionary says that name goes back to the "1590s, so called because it was made quickly," though I suspect it was based on wheat, oats or another grain outside of the New World. From "Americanisms," there's also, at another heading: "Hoe-cake.

A cake of Indian meal, baked before the fire.

In the interior parts of the country, where kitchen utensils do not abound, they are baked on a hoe; hence the name." And yet another heading: "Johnny-cake. A cake made of Indian meal mixed with milk or water. A New England Johnny-cake is invariably spread upon the stave of a barrel-top, and baked before the fire. Sometimes stewed pumpkin is mixed with it." There's also: "Hominy. Food made of maize or Indian corn boiled, the maize being either coarsely ground, or broken, or the kernels merely hulled."
6. What was a slang word used by blacks to label whites in general, not necessarily in a complimentary way?

The 1859 "Dictionary of Americanisms" said it was "A term universally applied to white men by the blacks of the African coast, the West Indies, and the Southern States. In the language of the Calabar coast, buckra means devil; not, however, in the sense we apply to it, but that of a demon, a powerful and superior being." The Online Etymology Dictionary dates its entry into English around 1790 and says it was a negative label used by blacks for poor whites in particular.

It's difficult to get a sense of the nuances of the word, as widespread and changing as it was, used by people from so many backgrounds. William and Ellen Craft, escaping in disguise from slavery, recalled a black man referring to Ellen, disguised as a wealthy white male invalid, as a "little don up [bandaged up] buckra."
7. What slang term was used for some poor southern whites who practiced geophagia?

The definition of a clay eater often was a mixture of accurate observation and strong personal prejudices. The 1859 "Dictionary of Americanisms" included the this: "Clay-eaters. A miserable set of people inhabiting some of the Southern States, who subsist chiefly on turpentine whiskey, and appease their craving for more substantial food by filling their stomachs with a kind of aluminous earth which abounds everywhere.

This gives them a yellowish, drab-colored complexion, with dull eyes, and faces whose idiotic expression is only varied by a dull despair or a devilish malignity.

They are looked down upon by the negroes with a contempt which they return by a hearty hatred." More scientifically minded observers in the period reported the habit occurred world-wide among all races (for example, George Henry Lewes, "The Physiology of Common Life," Edinburgh: 1859, Vol. 1, p. 54).

The sallow, unhealthy appearance of clay eaters, reported by many observers, may have been a sign of hookworm infestation, common but unrecognized in the antebellum South. Dr. Charles Wardell Stiles did some early investigation, but the answer has not been completely determined. If the theory is true, hookworms caused both geophagy and a certain appearance.
8. What negative term was used for politicians who were "advocates of extreme Southern views" circa 1859?

The Online Etymology Dictionary says fire eater came from 1804, meaning a "person of irascible or recklessly defiant disposition;" and in the U.S., a "vehement Southern partizans (1851)." The 1859 "Dictionary of Americanisms" said it was "of recent introduction."
9. What sort of religious views did "come-outers" profess to hold in 1859? They were mostly in New England and some other northern states.


Answer: they had "come out" of their churches and followed Christ in their own ways

Rev. James A. Thome published a long article dealing with "Come-Outism and Come-Outers" in the 1846 Oberlin Quarterly Review, so it must have been a big enough issue to worry about then. The 1859 "Dictionary of Americanisms" said the name was applied to those "who have recently come out of the various religious denominations with which they have been connected; hence the name...

They believe Jesus Christ to have been a divinely inspired teacher, and... that Christianity, as it existed in Christ, is a life rather than a belief." They tended to be against slavery and encouraged other churches and groups to be against it as well.
10. What would one say a voter was doing in 1859, if he refused to take a side until he saw which way things might go?

The 1859 "Dictionary of Americanisms" defined it as "The practice of 'sitting on the fence,' or remaining neutral in a political contest until it can be seen 'which way the cat is going to jump.'" It quoted the New York Mirror, "The South will not vote for a Northern candidate who is nominated as such, nor the North for a Southern man who is nominated on exclusive Southern principles.

In this matter there can be no neutral ground... it admits of no fence-riding." The term wasn't exactly new. Back on Sep. 20, 1831, the Gettysburg Compiler had published a similar definition: "This term is used [toward politicians] when they remain uncommitted on either side, until they ascertain on which side of the fence to dismount."
Source: Author littlepup 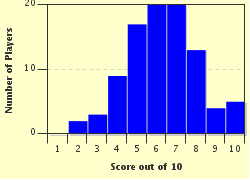