This quiz is about slang words and expressions that were once popular but are now obsolete. See how many you know!

Quiz Answer Key and Fun Facts
1. In Puritan times in New England, if someone told you that "you blushed like a black dog," he would be implying that you were what?

To say that someone "blushed like a black dog" implied that they did not blush at all, in other words, that they were shameless. "Black dog" was also a term used to describe a counterfeit coin. Today one will sometimes hear the phrase "black dog" used as a synonym for depression.
2. "Stuck a feather in his hat and called it macaroni." We've all heard these words in the song "Yankee Doodle" from Revolutionary War times, but what is the meaning of "macaroni" in this context?

The term seems to derive from the Macaroni Club in London. Its members were young dandies who followed the latest fashions; so "macaroni" as a noun came to mean a young man who was overly concerned with clothes and his appearance, and as an adjective it described something that was in high fashion at the time.

The lyrics are making fun of colonials who thought that sticking a feather in their hats would make them well-dressed.
3. In the early part of the 19th century, if you were going to a sporting event that featured two "milling coves," what sort of entertainment were you going to see?

"Milling cove" is derived from the verb "to mill," which meant to beat or fight, and "kova" a Romany or Gypsy word meaning "man." So a "milling cove" was a fighting man, i.e., a boxer or pugilist. Prize fighting was illegal in Britain and some parts of the United States, but it was still very popular.

In Georgian times, boxers fought with their bare knuckles, and were allowed to hold and throw their opponents down; fights were bloody and dangerous affairs that continued until one man was literally not able to stand.
4. In the decades prior to the Civil War, what did "going to see the elephant" mean?


Answer: To set off on an adventure

This was once a very common phrase. It seems to have been popular in the 1840s, when young men heading to California to join the gold rush would say they were "going to see the elephant." In a broader sense, it meant to undertake anything that promised to be unusual or novel. During the Civil War, it took on a different meaning; soldiers who had actually been in battle would say that they "had seen the elephant."
5. During the Civil War, did the words "skedaddle" and "absquatulate" have roughly the same meaning?

Both "skedaddle" and "absquatulate" mean to run away, or depart quickly. Each carries an additional connotation of cowardice or wrongdoing. Both words seem to be of American origin, although the etymology of both is disputed. Skedaddle seems to carry a military association; in the Civil War it meant to flee to the rear in the face of enemy fire. Absquatulate was often used to describe confidence men or embezzlers who secretly absconded with their victims' funds.
6. The term "grass widow" is still heard rarely today, but it is not as popular as it once was. What does "grass widow" mean in American English?


Answer: A woman who is divorced or separated from her husband

In British English, the term "grass widow" can mean a woman whose husband is temporarily away on business, but in American English a more permanent separation is implied. The term "grass widow" dates all the way back to 1528, when it originally meant a prostitute or courtesan who had been abandoned by her patron.

The modern meaning may derive from the practice of sending the wives of English officers stationed in India to cooler climates during the summer months. Use of this term is mildly opprobrious, implying that the lady in question may be taking advantage of her absent or divorced husband to indulge in some form of hanky-panky.
7. Around 1905, a new expression entered the language. What did "23 skidoo" mean?


Answer: Go away, get lost

No one is certain about the origin of this expression, and none of the theories sound very convincing. The one most cited is that when New York City's Flatiron Building was constructed in 1902 at 23rd Street and Broadway, its triangular shape caused high winds to swirl around it at street level. Men would loiter by the building to watch women's skirts being blown upwards by the wind until the police would force them to leave the area.

The flappers and their sheikhs certainly had some memorable turns of phrase, most of which have sadly vanished from American English. Other feline phrases that meant something was excellent were "the cat's whiskers" and "the cat's meow." "Getaway sticks" was a slang term for a woman's legs, and "to pull a Daniel Boone" meant to vomit. "Thicker than a five dollar malt" meant stupid, and if a girl told you "the bank's closed," it meant you weren't going to get any action that night.
9. During World War II, what did it mean to "cut a rug"?

The term "cutting a rug" for dancing actually goes all the way back to the 1920s, but it was still in use during World War II. Another term for dancing that has almost died out is "trip the light fantastic."
10. In the 1950s, what was a "church key"?


Answer: A can or bottle opener

Believe it or not, there was a time when beer did not come in bottles with twist-off caps or cans with pull-tabs. The cans and bottles were tightly sealed and you needed something to get them open. The solution was a piece of pressed steel that had a triangular point on one end for poking holes in cans, and a hook at the other end for removing the caps on bottles. For some reason, these were called "church keys," even though they did not look like keys.

These openers are still made, although they are seldom referred to as church keys nowadays, and since most beer is sold in containers that are easily opened, their usefulness has been diminished.
Source: Author daver852 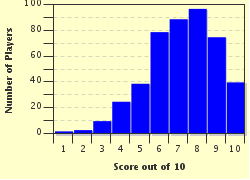